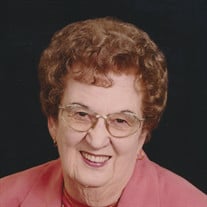 Agnes Irene Berge of Humboldt formerly of Bode was lifted up to be with her Lord March 22, 2018 at Humboldt County Memorial Hospital. Funeral services will be held Wednesday March 28, 2018 at 10:30 a.m. at Saint Olaf Lutheran Church in Bode. A visitation will be from 5 to 7p.m. at the Mason-Lindhart Funeral Home on Humboldt. Burial will follow the service at Saint Olaf Cemetery in Bode. The Mason-Lindhart Funeral Home of Humboldt is assisting the family. Agnes I. Berge, the daughter of Carl and Selma (Sween) Opheim, was born October 28th 1921 o a farm between Bode and Ottosen. They moved to Bode when she was in the 2nd grade, and she graduated in 1939 from Bode High School where she played basketball. She worked at Eastman Studio for a year and a half, In 1942 she married Harlan Berge. The couple lived on farm southwest of Bode and then moved to the southwest corner of Bode in 1963. They lived there until Harlan passed away in October of 2006. Agnes then moved to Springvale Independent Living in Humboldt. Agnes worked for some 30 years in the post office in Bode, Retiring December 31, 1976. She was a member of St. Olaf Lutheran Church of Bode all her life. She was the chairman of the big Lutefisk Supper for 3 years, but she had served as a waitress from the time she was 18 until they quit having it a few years back. Agnes and Harlan spent 37 winters in Florida, 1 in Arizona, and 1 in Texas. They also spent some 30 summers at Lake Okoboji. Those remaining to remember and celebrate Agnes’s life include her children Patty (Gary) Peterson of Pocahontas and Jerry (Sally) Berge of Okoboji; grandchildren Melanie Peterson, Amy (Dan) Kilkenny, Jon (Lisa) Peterson, and Jennifer (Brett) Honn; and eight great-grandchildren, plus numerous nieces and nephews. Preceding Agnes in passing were her parents, husband Harlan, sisters Laila, Doris, Velma, Orpha, Marion, and Barbie; and brother Keith.

Agnes Irene Berge of Humboldt formerly of Bode was lifted up to be with her Lord March 22, 2018 at Humboldt County Memorial Hospital. Funeral services will be held Wednesday March 28, 2018 at 10:30 a.m. at Saint Olaf Lutheran Church in... View Obituary & Service Information

The family of Agnes I. Berge created this Life Tributes page to make it easy to share your memories.

Agnes Irene Berge of Humboldt formerly of Bode was lifted up...

Send flowers to the Berge family.