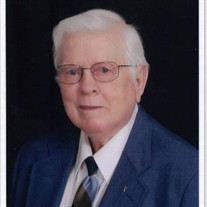 Arthur “Richard” Christianson, 93, passed away on Tuesday, December 10, 2019 at Friendship Haven in Fort Dodge. Richard was born on December 4, 1926 in Bode, Iowa to Arthur and Esther (Rolland) Christianson. He grew up and attended school in Bode. Richard entered the Army in November of 1942 and proudly served his country during World War 2. On December 4, 1949 he was united in marriage to Jeanette Bratland in Ottosen, the couple then made their first home in Bode. Richard was employed with the Coca-Cola Bottling Company and Gunder Manufacturing for a time before beginning a longtime career of 32 plus years with the Iowa Department of Transportation as a highway maintenance worker. In his spare time, he drove the semi for MS & Sons Trucking. Richard loved cars, trucks and motorcycles throughout his lifetime and enjoyed traveling with Jeanette. He loved his family and friends with all his heart, especially his granddaughters- Michelle and Molly- and attended all of their events. He had a special love for animals and was a very kind and caring person who was always ready to visit with everyone he met and gave them a warm smile. He is survived by his daughter Jana (Tim) Terwilliger of Humboldt, his granddaughters Michelle (Andy) Kluss and Molly (A.J.) Dickinson, his great-grandchildren Darbie Dickinson and another due in May 2020, brothers Don (Marilyn) Christianson of Bode and Rolland “Chris” (Melinda) Christianson of Naples, Florida, sisters-in-law Alice Christianson of Springville, California, Dorothy Dale of Dakota City and Virginia (Sherman) Silbaugh of Humboldt. He was preceded in death by his parents, wife Jeanette, his sisters Berniece French, Ardis Larson and Ruth Schumacher, his brothers, Virgil and James Christianson and his brothers and sisters-in-law Harold Dale, Don Larson, Everett “Sam” French and Eleanor Christianson. Visitation will be from 4:00 – 6:00 p.m. on Saturday, December 14th at the Mason-Lindhart Funeral Home in Humboldt. Funeral Services will be at 2:00 p.m. Sunday, December 15th at Our Saviour’s Lutheran Church, Humboldt. Burial will be in Union Cemetery. www.masonlindhart.com

Arthur &#8220;Richard&#8221; Christianson, 93, passed away on Tuesday, December 10, 2019 at Friendship Haven in Fort Dodge. Richard was born on December 4, 1926 in Bode, Iowa to Arthur and Esther (Rolland) Christianson. He grew up and attended... View Obituary & Service Information

The family of Arthur "Richard" Christianson created this Life Tributes page to make it easy to share your memories.

Send flowers to the Christianson family.