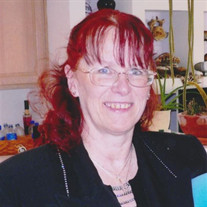 Barbara was born September 17, 1952 in Charles City, Iowa to John B. and Margie A. (Schwickerath) Martin. She was the eldest of four children. She began her formal schooling at Immaculate Conception Catholic School in Charles City until her parents moved to Humboldt in 1965. She then attended St. Mary’s Catholic School through the 8th Grade and graduated from Humboldt High School in 1970. During her high school years, Barbara discovered her love of sewing, drama, speech, and choir and her love of helping people. She was very active in CYO. All through her high school years she worked at Johnny’s Steak Harbor and in 1970, she was a Humboldt County Fair Queen Candidate. While attending ICCC in Fort Dodge, she was active in Soundsation and joined The Red Barn Theater. Following her college graduation, Barbara worked for the Soil Conservation Office in Fort Dodge. She was transferred to Des Moines and furthered her education at Drake University where she received her Masters in Counseling Psychology. She pursued her career as a vocational Rehabilitation Counselor for the U.S. Department of Veterans Affairs. She was transferred to Minnesota where in 2000, she met the man of her dreams, Joe Barnhill. The couple married in a private ceremony on September 21, 2003 and they relocated to Las Cruces, New Mexico. The couple exchanged vows again in a double wedding that included her sister-in-law, Lisa and her husband Bill Stone. The wedding was held in Dallas, Texas on John B’s birthday, November 6, 2004. Barbara was proud her father walked her down the aisle. Barbara continued as a counselor for the VA until her retirement in 2008. In 2014, they moved to Sachse, Texas. Barbara was a woman of many talents and could do anything she attempted. She loved quilting and cherished the times she had with her grandmother, Katie who taught her the skill. Her sewing machine was always out and she made all of the brides maid dresses for her sisters wedding, First Communion dress for her niece, quilted Christmas Tree skirts and created a Mrs. Santa Claus costume. She was a gifted woodworker, a talent she inherited from her dad whom she called “Pop”. She was a Sunday school teacher, a world traveler, and was proud of the two missions she went on with her church to Guatemala. She loved to make hats, loved to read, and enjoyed their cats. She loved everyone and made everyone feel special. Barb loved her entire family, especially her husband of 14 years, Joe Barnhill of Sachse, TX; her mother, Margie A. Martin Rurup of Humboldt; brother, Patrick (Linda) Martin of Des Moines, nephew, Ben (Jessica) Martin and baby, Irene; brother, Kelly Martin of Des Moines, nieces, Kandise (Andy) Thilges and Kortnie Martin, great nieces, Nevaeh and Molly, Ashlynn, Kailee, and Krystal, and nephew, Kelly, Jr.; sister, Sherri (Gary) Myers of Humboldt, nephew, Johnathon (Katie) Myers, and great niece, Alexis; Joes children, who she loved as her own, daughter, Michelle (Anthony) Beal, Kala (Barry) Jenkins and Regan; son, Dakota (Monica) Beal, Grayson and Mack; daughter, Ayesha (David) Parker, Chasity (Caleb) and Abriella; son, Benjamin (Samantha). Barbara was diagnosed with Leiomyosarcoma in 2014. With Joe always by her side, her family only saw a beautiful smile and a happy heart. She was a strong talented woman and will be greatly missed. Barbara’s father, John B. Martin met her at Heaven’s door where she was also met by a favorite uncle, Mark Schwickerath; step-father, Palmer Rurup; aunts and uncles, Dolly and Virgil Schwickerath, Florence and Irvin Throndson, Virginia Schwickerath, and Bob Stricke; grandparents, Herman and Katie Schwickerath and James and Elizabeth Martin.

Barbara was born September 17, 1952 in Charles City, Iowa to John B. and Margie A. (Schwickerath) Martin. She was the eldest of four children. She began her formal schooling at Immaculate Conception Catholic School in Charles City until... View Obituary & Service Information

The family of Barbara Barnhill created this Life Tributes page to make it easy to share your memories.

Send flowers to the Barnhill family.