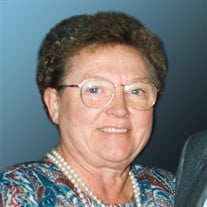 Betty J. Hood, age 85, of Humboldt, died June 23, 2016, in Hospice care at the Humboldt County Memorial Hospital. Funeral services will be held on Friday, July 1, at 11 am at Faith United Methodist Church, Humboldt Center, with Reverends Christy Ehrle and Dan Mixdorf officiating. Burial will be in the Union Cemetery at 1:30 pm. Visitation will be from 4:00 to 7:00 PM on Thursday June 30, at Mason-Lindhart Funeral Home. Betty Jean Bowen, daughter of Milo and Agnes (Crumbaker) Bowen, was born January 15, 1931, in their farm home in Weaver Township. She attended Weaver Number 5 country school and later graduated from Humboldt High School Class of 1948. After graduation she worked as Deputy Recorder in the Recorder’s office until her marriage. On October 1, 1950, she married Donald Hood, whom she had met through the Humboldt County Rural Youth Program (RYP) when Donald was president and Betty was secretary. They farmed near Rutland until 1958 when they moved to Bode where they farmed until Mr. Hood’s death in 2003. Betty moved to Humboldt in 2006. Betty was a lifelong member of the Methodist Church. She was Superintendent and also taught Sunday School for 40 years at the Rutland Center, and held various offices for the Rutland United Methodist Women. Betty was active in the Republican Party, served on the board of directors of the Humboldt Memorial Hospital Auxiliary and American Cancer Society and was a member of her neighborhood club at Bode. Betty was a Farm Bureau member for more than 50 years, served as Humboldt County Farm Bureau Women’s Chairman, including working on the state resolution committee. A news article stated of Betty, “She has served on more committees and worked harder than anyone else.” It was through the Farm Bureau that she and her husband Donald hosted many international students on their farm including students from Finland, India, Chile, and Mali. Betty enjoyed vacationing around the United States, and was thrilled to experience trips through Europe, Central and South America with Donald. Betty was an avid reader and photographer. She possessed the gift of a poet’s mind and an artist’s eye for beauty, which she captured in rhymes and photos of nature’s beauty (and her grandchildren’s activities!). Betty’s hobby was writing letters to friends, and she included newspaper clippings that she thought they would find interesting. She had a phenomenal memory for birth dates and other important events and kept a personal journal for more than 70 years. Betty was the best grandmother and role model to those who were fortunate to know her, leading by example. She had high ethical standards and she would stand strong for what was right. Her sense of humor was fantastic and her loved ones will dearly miss her laughter. Mrs. Hood is survived by her son and daughter-in-law, Kenneth and Margaret Hood of Rutland, daughters and sons-in-law Linda and Dan Mixdorf of Cedar Falls and Elaine and Charles Baker of Conifer, Colorado, and her Chilean “son” and “daughter-in-law” Ivan and Marisela Munoz of Doral, Florida; seven grandchildren and six great-grandchildren. Betty is survived by her devoted companion of 13 years, Keith Berkhimer, for whom her children will be forever grateful. She was preceded in death by her loving husband Donald Hood, her parents, sister Lila Sandusky of St. Joseph, Missouri, and brother Ralph Bowen of Humboldt. The family requests memorial contributions be made to the tax deductible Cure Alzheimer's Fund at Error! Hyperlink reference not valid. or Hospice of Humboldt County.

The family of Betty J. Hood created this Life Tributes page to make it easy to share your memories.

Send flowers to the Hood family.