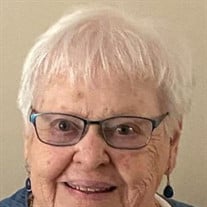 Beverly J. Gangstead, 91, of Dakota City, passed away peacefully with her daughters by her side on Sunday, August 1, 2021 at the Paula Baber Hospice Home in Fort Dodge. She was born December 28, 1929, in Kalamazoo, Michigan, the daughter of Maynard and Esther (Sharp) Patton. She was raised in Kalamazoo and at age 16 moved with her family to Goldfield, where she graduated from Goldfield High School. She became engaged to James E. Gangstead after he returned home from the war and they were married on June 27, 1947. The couple made their home on the family farm near Goldfield where they started their family. In the early 1950’s, Jim, Bev and family relocated to the Humboldt area where Jim began a 40 year career with Iowa Public Service (now Midwest Energy). Beverly worked for twenty-three years, until her retirement, at the Fashionette in Humboldt. In 1955, they completed construction of their new home in Dakota City, where Bev continued to reside. As life-long members of Our Saviour's Lutheran Church, Bev and Jim enjoyed teaching Sunday School during their children’s school age years. After retirement both Bev and Jim enjoyed “wintering” in Mesa, Arizona and traveling throughout the western U.S. Beverly is survived by her daughters Dr. Sandra “Sandy” Gangstead of Milledgeville, Georgia and Eilleen Marie Pope of Dakota City, her granddaughter, Jamie Brown, her great-grandchildren Kyle McBeth and Karter Simonsen, her brother Donald Patton of Rogers, Arkansas, and her sister Sally Patton of Murray, Kentucky. She was preceded in death by her parents, husband Jim, her daughter Sherry and her brother Dale. Visitation will be from 5:00 – 7:00 p.m. on Wednesday, August 4th and the Funeral Service will be held at 11:00 a.m. on Thursday, August 5th both at the Mason-Lindhart Funeral Home in Humboldt. The family asks that you please wear a mask. Burial will be in Indian Mound Cemetery. www.masonlindhart.com

Beverly J. Gangstead, 91, of Dakota City, passed away peacefully with her daughters by her side on Sunday, August 1, 2021 at the Paula Baber Hospice Home in Fort Dodge. She was born December 28, 1929, in Kalamazoo, Michigan, the daughter of... View Obituary & Service Information

The family of Beverly J. Gangstead created this Life Tributes page to make it easy to share your memories.

Send flowers to the Gangstead family.