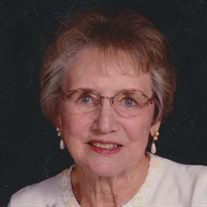 Beverly Jean Jennings, better known as Jean, passed away on January 30, 2017 at her home in Humboldt. A Mass of Christian Burial will be held for her on Friday February 3 at 11:00 a.m. at St. Mary’s Catholic Church in Humboldt, Father Brian Danner celebrant. Visitation will be from 5 to 7 p.m. Thursday at the Mason-Lindhart Funeral Home in Humboldt with a Rosary at 4:45 and the Parish Scripture Service at 5. Interment will be at St. Mary’s Cemetery in Humboldt. Beverly Jean Waterbury was born March 22, 1932 to Harold Richard Waterbury and Velma McFarland Waterbury (later Colwell) near Ledyard in Kossuth County. Her family moved to Humboldt when Jean was very young, and she graduated from Humboldt High School in 1951. She then attended LaJames beauty school in Fort Dodge and worked as a beautician in Humboldt for many years. On May 3, 1952 Jean married Wayne Jennings at St. Mary’s Church in Humboldt. Wayne and Jean Welcomed three sons into their family Rick, Greg, and Doug. Jean continued to share time between her work and raising the family. She worked at the Charm Shop and the New Image Salon. Jean worked at Jennings Clothing in Humboldt and Model Clothing in Fort Dodge until 1987. From 1987 until Wayne’s sudden death in 2000, Jean traveled the country selling fiber optic lights, wind chimes and other knickknacks at trade shows. She returned to Humboldt and moved into her home on West River Drive. She remained there until moving to Springvale Independent Living in October of 2016. Jean was a pleasant and cordial woman who never said a bad word about anyone and never knew a stranger. She was a member of St. Mary’s Parish, the church choir, and the Women of the Spirit. She was a member of the Humboldt Hospital Auxiliary, serving as president. She volunteered her time at Genevieve’s Place at the hospital. Jean enjoyed playing golf, gardening (particularly flowers), and walking. Those remaining to cherish Jean’s memory include her sons Rick (Sherry) Jennings of Humboldt, Greg Jennings of Scottsdale, AZ, and Doug Jennings of Fort Dodge; Seven grandchildren, three step-grandchildren; Ten great-grandchildren and twenty-two step great-grandchildren; three step great-great grandchildren; sisters Patsy Powers of Duncombe and Rosemary Dencklau of Humboldt. Preceding Jean in death are her parents, husband Wayne, grandson Branden Jennings, sisters Lois Riles, Evie McDonald, brother Joseph “Spud” Colwell, step-sister Dorothy Reynolds, and brothers-in-law Bob Riles, John Powers, Nick Reynolds, Phil McDonald, and Willard Dencklau. The family requests that memorial gifts be given to the American Heart Association or the American Lung Association.

Beverly Jean Jennings, better known as Jean, passed away on January 30, 2017 at her home in Humboldt. A Mass of Christian Burial will be held for her on Friday February 3 at 11:00 a.m. at St. Mary&#8217;s Catholic Church in Humboldt, Father... View Obituary & Service Information

The family of Beverly Jean Jennings created this Life Tributes page to make it easy to share your memories.

Send flowers to the Jennings family.