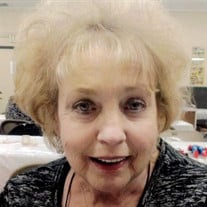 Carolyn Jean Pirie (Applegate), 71 of Fort Dodge, passed away on Wednesday morning, December 19, 2018 at the Humboldt Care Center North. Carol was born November 19, 1947 in Fort Dodge, Iowa, the daughter of Harold and Lucille (Anderson) Pirie. She was raised and attended school in Fort Dodge. Carol met Sherman Applegate at the old “Dairy Mart” in Fort Dodge and they were united in marriage on May 26, 1966. They raised four children together. Carol enjoyed bingo, concerts and traveling until her health started to decline. Most of all Carol enjoyed spending time with her family and friends. She is survived by her children, Tracy (Marlin) Stiawalt and David (Sara)Applegate both of Humboldt and Kimberly Koch (Applegate) of Roanoke, Texas, her grandchildren, Amber Stiawalt, Lindsey Martin, Kelsy, Dakota, Dylan, Ashley, Jaci and Tyler Applegate, Madison, Melissa and Adam Koch and eight great-grandchildren. She was preceded in death by her parents, three brothers, James, Richard and Robert Pirie, an infant sister, Rachel Pirie, Sherman Applegate, son, Todd Applegate, an infant grandson, David A. Applegate and lifelong friends, Dee Davis and Char Ely. Visitation will be from 5:00 – 8:00 p.m. on Wednesday, December 26th and the Funeral Service will be at 2:00 p.m. Thursday, December 27th both at the Mason-Lindhart Funeral Home in Humboldt. Burial will be in Indian Mound Cemetery. www.masonlindhart.com

The family of Carolyn Jean Pirie created this Life Tributes page to make it easy to share your memories.

Send flowers to the Pirie family.