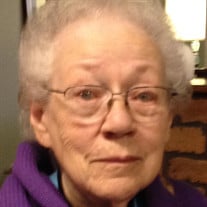 Charlene Lippolt, 89, of Humboldt, passed away on Thursday, November 8, 2018 at the Humboldt County Memorial Hospital. Charlene was born December 28, 1928, in Algona, Iowa, to Charles H. and Ruth C. (Curran) Clement. She was raised and educated in Algona, graduating from Algona High School in 1944. She had played the piano in the Methodist church every week with her sister, was a life guard at the local swimming pool in the summers, and had a keen intelligence as well as artistic talent. At a time when many young women did not go on to college, Charlene attended the Iowa State Teachers College in Cedar Falls. She was united in marriage to Robert (Bob) Oberman on October 25, 1949. The couple made their home in Columbus Junction for a time before moving to Humboldt in 1957, where Bob worked at the local Ford Dealership. Charlene worked as a legal secretary for a number of years until shortly after Bob’s death in 1967. As a young widow with 3 children to raise alone, she squared her shoulders and ran for the office of Humboldt County Clerk of Court, a position she then held for many years. In 1974, she married Carl Lippolt from Hardy, Iowa. The couple made their home in Humboldt, where they established Lippolt Commodities, where they both worked as commodity brokers until they retired. In her earlier years, Charlene could often be found in the kitchen, having her coffee and a “smoke,” drawing floor and house plans on graph paper. Many days, the children would hear her limbering up her fingers by playing Strauss, Chopin, or Gershwin on the piano downstairs as they got ready for school. She and Carl thoroughly enjoyed playing cards, both at home and at the local VFW Senior Center. She is survived by her children, Mike “Obee” Oberman of Humboldt, Pat Parker of Ames, Charlie (Dawn) Oberman of Bloomington, Minnesota; her stepsons, Dennis and Doug Lippolt of Hardy; her grandchildren, Courtney Parker, Devon(Amber) Oberman, Melinda (Zach) Hamann and Melissa (Chad) Spencer; her step grandson, Josh (Mandy) Lippolt; her niece, Christine (Larry) Cole of Davenport, and eight great grandchildren. She was preceded in death by her husbands, her sister, Ruth Ann Gerling, and her step granddaughter, Andrea. Visitation will be at the Mason-Lindhart Funeral Home in Humboldt on Monday, November 12th, from 11:00 a.m. until the time of the 12:00 noon Funeral Service. Lunch will follow. Burial will be in Union Cemetery Humboldt. www.masonlindhart.com

Charlene Lippolt, 89, of Humboldt, passed away on Thursday, November 8, 2018 at the Humboldt County Memorial Hospital. Charlene was born December 28, 1928, in Algona, Iowa, to Charles H. and Ruth C. (Curran) Clement. She was raised and educated... View Obituary & Service Information

The family of Charlene Oberman Lippolt created this Life Tributes page to make it easy to share your memories.

Charlene Lippolt, 89, of Humboldt, passed away on Thursday, November...

Send flowers to the Lippolt family.