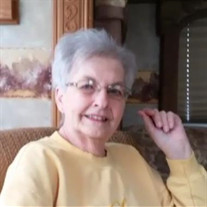 Coleen M. Davis, 74, of Dakota City, entered heaven on October 18, 2017 at the Humboldt County Memorial Hospital after a courageous battle with cancer. Funeral services will be 1:00 p.m. Monday, October 23, 2017 at the Faith United Methodist Church in Humboldt. Visitation will be from 4-7 p.m. Sunday at the Mason-Lindhart Funeral Home. Interment will be in Indian Mound Cemetery, Humboldt. Coleen M. Weathers, the daughter of William and Mae (Duvall) Weathers was born June 24, 1943 on the family farm near Manson, Iowa. She was raised and educated at Manson and in Minnesota and gradated from Manson High School. She married Delbert Wendt and to this union, two children, Paul and Carmella, were born. In September of 1972, she was united in marriage to Frank Davis and the couple had one child, Denny. Coleen worked as a receptionist at the Best Western Starlite Village in Fort Dodge, worked for the Humboldt/Dakota City Chamber of Commerce, and served as an accounts payable clerk for Corn Belt Power in Humboldt for 38 years until her retirement. Coleen enjoyed bowling and was active on several bowling leagues for many years. She enjoyed camping with her family and loved watching the wildlife in the yard of her home. She especially loved the time she spent with all of her grandchildren. She will always be remembered by her family and many friends for her contagious laugh and always putting others first. Coleen is survived by her husband, Frank Davis of Dakota City; her children, Paul (Tammy) Wendt of Kahoka, MO, Carmella (Jeff) Friesth of Humboldt, and Denny (Judy) Davis of Gilmore City; step children, TC (Rob) Lowrey of Colorado Springs, CO, Barb (Doug) Marchand of Omaha, NE, and Sunni (Tom) Holtzen of St. Louis, MO; grandchildren, Jordan (Christina) Wendt and Jaden (Jacob) Wendt, both of Kahoka, MO, Lauren (Gage) Friesth, Hannah (Adam) Friesth, and Ian Friesth, all of Humboldt, and Nicole (David) Schwering and MaKayla Myers, both of Gilmore City; and her step-grandchildren. She was preceded in death by her parents, William and Mae Weathers, and brothers, Harold and Alvin Weathers.

The family of Coleen M. Davis created this Life Tributes page to make it easy to share your memories.

Send flowers to the Davis family.