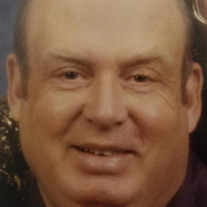 Danny R. Thompson, 75, of Mesa, Arizona, formerly of Humboldt, passed away August 21, 2020 at home in Arizona. He was born April 11, 1945 to Hiram and Betty (Reed) Thompson in Fort Dodge. He grew up an only child on a hog farm outside of Humboldt. Danny met Jan Pedersen in 1962 when she was 14 and he was 17. He found out she had a crush on him. After Danny graduated from Humboldt High School in 1963, he enlisted in the Air Force. He was medically discharged and lived in California for a time. He moved back to Iowa and went to college, graduating #1 with an accounting degree. He never did see himself working behind a desk and applied to be a Park Ranger. He tested second best, however they only hired one. Danny dated a few women, but no one was Jan. When Jan moved back to Humboldt they reunited and their first date was to take her daughter to the Des Moines zoo. They married November 3, 1972 at Our Saviors Lutheran Church in Humboldt and Danny adopted Veronica. In July 1973 they had a baby girl, Victoria. He worked for DeKalb. In 1983 the Humboldt DeKalb plant closed and he took a transfer to Storm Lake. But by 1987 DeKalb had more cutbacks and he moved the family to Arizona. During the past 33 years, Danny had a few jobs; maintenance, warehouse, and an ice cream warehouse. But he found the perfect job working at Xavier Coin Shop. He made good friends and he enjoyed the customers. No one was more suited to dig through coin collections, evaluate the coins and sort them. Danny loved his son, a sweet fluffy orange tabby cat he rescued from near the Humboldt DeKalb plant. Once living in Arizona, every night Danny would take Taffy out for a walk on a leash. He even proudly walked Taffy through the Petrified Forest and showed him the petroglyphs. Taffy lived to be nearly 21 years old. Danny also loved another cat, Seth. Sadly, and fortunately, Seth at 19 years old, made the journey into the next life with Danny. He is survived by his daughter, Roni Thompson, his grandsons, Danny and Kegan Green, sister-in-law, Karen Cran; cousins and many nieces and nephews. Danny was preceded in death by his parents Hiram and Betty Thompson; his daughter Vicki Thompson and his wife Jan Thompson. On October 8th, Danny was there to help welcome his grandson, Kegan to heaven. A Graveside Memorial Service with military rites by the Sathers-Odgaard American Legion will be held at 11:00 a.m. on Friday, June 25th at Indian Mound Cemetery in Humboldt. www.masonlindhart.com

Danny R. Thompson, 75, of Mesa, Arizona, formerly of Humboldt, passed away August 21, 2020 at home in Arizona. He was born April 11, 1945 to Hiram and Betty (Reed) Thompson in Fort Dodge. He grew up an only child on a hog farm outside of... View Obituary & Service Information

The family of Danny R. Thompson created this Life Tributes page to make it easy to share your memories.

Send flowers to the Thompson family.