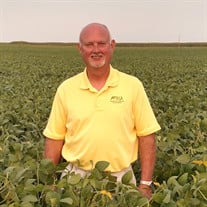 Dean J. Coleman, 62 of Humboldt, passed away on Tuesday morning, August 13, 2019 from injuries sustained in a farming accident. Dean was born November 2, 1956 in Fort Dodge, Iowa, the son of David and Maxzine (Weiss) Coleman. He was raised on a farm near Livermore on the Coleman Apple Orchard Farm. He graduated from Twin Rivers High School in 1975. On July 10, 1976, he was united in marriage to Carol J. Bacon. The couple made their home on the farm west of Humboldt where he was actively farming. He was Past President of the Iowa Soybean Association, the Humboldt County Farm Bureau and the Humboldt County Fair Board. He was currently on the board for the American Soybean Association. He and his wife hosted many foreign dignitaries at their family farm. Dean was recently appointed to the advisory board for the U.S. Secretary of Agriculture. He loved his family, enjoyed camping, fishing, golfing, snorkeling and loved to travel with his family. He is survived by his wife, Carol of Humboldt, his children, Nick (Jaime) Coleman of Ogden and Mike (Michelle) Coleman of Humboldt, his grandchildren, Jase, Olivia, Spencer, Addison and Katelyn, his mother, Maxzine Coleman of Humboldt, his brothers and sisters, Christine (Michael) Ryerson of West Des Moines, Dale (Marlene) Coleman of Livermore, Daniel Coleman of Storm Lake and Janice (Scott) Dickerson of Atlantic, brothers-in-law Doug (Lorrie) Bacon of Humboldt and Les (Diane) Bacon of Humboldt. He was preceded in death by his father, David, his mother-in-law and father-in-law, Gloria and Marvin Bacon, and his sister-in-law, Linda Bacon. Visitation will be from 4:00 – 7:00 p.m. on Thursday, August 15th and the Funeral Service will be held on Friday, August 16th at 10:30 a.m. both at Faith United Methodist Church in Humboldt. Burial will be in Indian Mound Cemetery. www.masonlindhart.com

Dean J. Coleman, 62 of Humboldt, passed away on Tuesday morning, August 13, 2019 from injuries sustained in a farming accident. Dean was born November 2, 1956 in Fort Dodge, Iowa, the son of David and Maxzine (Weiss) Coleman. He was raised... View Obituary & Service Information

The family of Dean J. Coleman created this Life Tributes page to make it easy to share your memories.

Dean J. Coleman, 62 of Humboldt, passed away on Tuesday morning,...

Send flowers to the Coleman family.