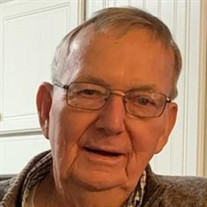 Dennis D. “Butch” Nussbaum, 82, of Humboldt, passed away at his home on Wednesday afternoon, December 15, 2021. He was born July 29, 1939 in Drake, North Dakota, the son of Henry and Julia (Larson) Nussbaum. He grew up in North Dakota and as a young man moved with his family to Colorado Springs, where he graduated from Palmer High School. He worked as a rancher in Colorado for a number of years until moving to Cedar Rapids, Iowa. He met Kay A. Cavanaugh and the two were united in marriage on July 2, 1966 in Gilmore City. The couple made their homes in Iowa, Colorado, Wisconsin and Arizona, before returning to Iowa in retirement. Butch worked as a welder for many years, enjoyed woodworking, fishing, feeding the birds, the Denver Broncos, home was his haven and he was known for his pancakes. He is survived by his wife Kay of Humboldt, his daughter Heidi (Todd) Smalley of Cordova, Tennessee, his grandchildren Erik (Kennedy Rodgers) Smalley, Audra Smalley and Scott Smalley, his great-grandson Mason Smalley, his sister Arlie and her husband Don of Denver, his brother Gary (Wilda) Nussbaum of Colorado Springs and many nieces and nephews. Butch wished to be cremated and have no formal service. Please remember him in your own special way. The Mason-Lindhart Funeral & Cremation Service of Humboldt is in charge of the arrangements. www.masonlindhart.com

The family of Dennis D. "Butch" Nussbaum created this Life Tributes page to make it easy to share your memories.

Send flowers to the Nussbaum family.