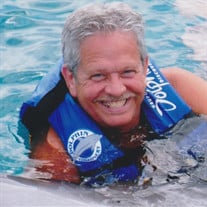 Dennis W. Pyle, 68, of Humboldt, passed away June 30, 2016 at Mercy Medical Center in Des Moines. A celebration of Dennis’ life, led by Pastor Doug Wolter, will be held at 11:00 a.m. Tuesday, July 5, 2016 at Oak Hill Church. A time for memories and sharing will follow in the fellowship hall of the church. The Mason-Lindhart Funeral Home of Humboldt is overseeing arrangements. Dennis is survived by his wife of 44 years, Brenda Pyle of Humboldt; son, Joshua (Amber) Pyle of Humboldt; daughter, Jaime (Nick) Coleman of Ogden; grandchildren, Hannah and Grant Pyle, Jenny and Austin Berte, and Jase and Olivia Coleman; brother, Ronald (Kathy) Pyle of Omaha, NE; sisters, Patricia Gillespie of Tucson, AZ and Susan (Kenneth) Dyer of Las Vegas, NV; brother-in-law, Roger Brooks of Bloomfield, IA; and several half brothers and sisters. He was preceded in death by his parents; sister, Margaret Brooks; 1 niece; and 2 nephews. Dennis Wayne Pyle, the son of Orville William and Marian Adeline (Wood) Pyle, was born January 12, 1948 in Ottumwa, Iowa. He was raised and educated in Ottumwa and graduated with honors from Ottumwa High School with the class of 1966. Following his education, Dennis moved to California where he took a job with the John Morrell Meat Packing Company in downtown Los Angeles. It was while living and working in Los Angeles, that he met Brenda McGrath on a blind date. The couple was united in marriage on March 11, 1972 at the First Christian Church in Anaheim, California. John Morrell soon transferred him to San Diego for two years until another transfer took the family to San Francisco, then to Seattle, Washington. His final transfer with the company came in May of 1990 bringing the family to Humboldt. On June 3rd of this year, Dennis retired after 48 years of dedicated service to John Morrell. Dennis was a faithful member and servant of Oak Hill Church. He enjoyed watching as well as participating in various sports and was an avid Seattle Seahawks fan. His competitive streak continued through games of racquetball as well as board games at home with Brenda. He enjoyed reading the Bible, traveling, watching movies, swimming and loved to build relationships with and help people. Above all, Dennis loved God, his church, his family and especially his grandchildren.

The family of Dennis W. Pyle created this Life Tributes page to make it easy to share your memories.

Send flowers to the Pyle family.