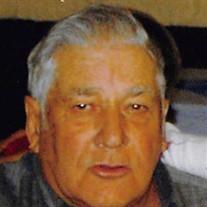 DeWayne “Tuffy” E. Kiley, 87, of Dakota City, passed away Sunday, February 24, 2019 at the Humboldt County Memorial Hospital He was born December 12, 1931 in Kanawha, Iowa, the son of John and Ernie M. (Broman) Kiley. He grew up in the Hardy-Renwick area and graduated from Vernon Consolidated High School. He enlisted and served in the United Sates Army, being stationed in Korea. He was united in marriage to Shirley A. Knudson on April 7, 1957 in Humboldt. The couple made their home in Renwick, then later Dakota City. Tuffy worked at W & H Coop for a time then the Chicago Northwestern Railroad. He particularly enjoyed horse races, time with family, working on the farm and the fishing trips to Canada. He is survived by his wife, Shirley of Dakota City, his daughters, Deanne (David) Myers of Humboldt, Lisa Kiley of Humboldt, his grandchildren, Shannon and Kylee, his great-grandchildren, Kasey, Colton and Hadley, his brothers, Leonard Kiley of Corwith, John (Barb) Kiley of Orchard, Nebraska and Ernie (Nelda) Kiley of Eagle Grove. He was preceded in death by his parents and his brother, Kenneth. Visitation will be from 5:00 – 7:00 p.m. on Friday, March 1st at the Mason-Lindhart Funeral Home in Humboldt, Funeral Services will be Saturday, March 2nd at 1:30 p.m. at Our Saviour’s Lutheran Church in Humboldt. Burial will be in Trinity Lutheran Cemetery, Hardy. www.masonlindhart.com

The family of DeWayne "Tuffy" E. Kiley created this Life Tributes page to make it easy to share your memories.

Send flowers to the Kiley family.