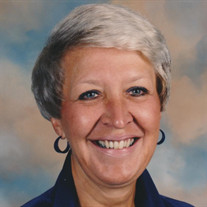 Dianne Holt, 73, of Humboldt, passed away March 16, 2018 at Trinity Regional Medical Center in Fort Dodge. Funeral services will be 11:30 a.m. Monday, March 19, 2018 at Our Saviour’s Lutheran Church in Humboldt. Visitation is from 10:30 – 11:30 a.m. Monday at the church. The Mason-Lindhart Funeral Home of Humboldt is assisting the family. Dianne was born March 11, 1945 in Algona, Iowa to Arnold and Thais (Schoelerman) Bueghly. She lived in Redwood Falls, Minnesota before moving to Everly, Iowa where she began school. Her mother’s work as a vocal music teacher took the family to Sanborn, Iowa, Brookings, South Dakota, and New Ulm, Minnesota where Dianne graduated from high school. She attended Mankato State University and received her BS Degree in Education and began her teaching career in Longville, Minnesota. That summer, she met Peter Holt in Okoboji, Iowa and the couple was united in marriage on November 2, 1968. They made their home in Humboldt and Dianne taught the 4th grade at Gilmore City. She then accepted a position with the Humboldt School District teaching 4th and 5th grades at Mease Elementary until her retirement after 31 years of service. Mr. Holt passed away in September of 2014 and Dianne continued to maintain her home in Humboldt until her death. Dianne was a member of Our Saviour’s Lutheran Church. She loved decorating, gardening and tending her flowers. She loved her family and circle of friends, but her grandchildren were most precious to her. Dianne is survived by her children, Michelle (Niall) McKeown of El Segundo, CA, and Peter (Tracey) Holt of Dubuque; grandchildren, Dannan and Kira McKeown and Emma, Matthew, and Ethan Holt; and her twin sister, Dierdre Hobbs of Walnut, CA. She was preceded in death by her parents and husband, Peter Holt.

The family of Dianne Holt created this Life Tributes page to make it easy to share your memories.

Send flowers to the Holt family.