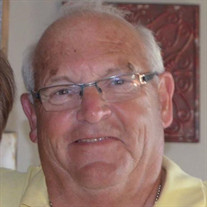 Don J. Connor, 69, of Humboldt, passed away October 23, 2017 at the Humboldt County Memorial Hospital. Funeral services will be 11 a.m. Thursday, October 26, 2017 at the Congregational United Church of Christ in Humboldt with the Rev. Shonda Deranleau officiating. Visitation is from 4-8 p.m. Wednesday at the Mason-Lindhart Funeral Home in Humboldt. Interment will be at 11 a.m. Friday in Marble Valley Cemetery, Gilmore City with full military rites by Adams American Legion Post 119 and Sathers-Odgaard VFW Post 5240. Donald John Connor, the son of James and Arlene (Johnson) Connor, was born January 13, 1948 at Minneapolis, Minnesota. He was raised at Excelsior, MN and graduated from Minnetonka High School with the class of 1966. He then attended the University of Minnesota at Duluth until enlisting into the United States Army. He served a two-year tour of duty in Vietnam and following his honorable discharge, returned to Minneapolis where he graduated from Brown Institute. A job offer from KHBT Radio brought Don to Humboldt where he met Diane Stamper. The couple was united in marraige on June 17, 1972 at the United Methodist Church in Gilmore City. The couple had three children, Matthew, Stephanie, and Elizabeth Ann. They made their home briefly in Humboldt before moving to the Stamper family farm near Gilmore City. Don went to work for the Christensen Oil Co. until accepting a position at Crest Pak in Humboldt. He served as purchasing agent for Laguria Foods until his retirement in 2014 after 38 years of service. Don spoke of his retirement as living the dream everyday but most of the couples recreation involved following the grandchildren’s many activities. He was instrumental in the food bank and served as an organizer of the Iowa Food Bank in Humboldt County where he enjoyed working with community volunteers. He enjoyed golfing and the great outdoors, baking, reading, and following the Twins and Vikings. He loved people and will always be remembered as a hugger. Above all, Don enjoyed the time he spent with his children and grandchildren. He was a member of the Congregational United Church of Christ where he took pride in sharing as a licensed lay minister. In addition to serving on the many church boards, Don was often called on to fill the pulpit as needed and conducted many funerals, weddings, and baptisms over the years. He could also been seen filling vacancies in many other north central Iowa churches. He found great reward in visiting church members, volunteering in and conducting church services for area care centers, and officiating Christmas Eve services at the Hardy Church on the Museum grounds. Don is survived by his wife of 45 years, Diane of Humboldt; his surviving children, Matt (Kim) Connor of Delano, MN and Steph (John) Sinclair of Carlisle, IA; grandchildren, Caden, Noah, and Sydney Connor and Amelia, Lainey, and Addison Sinclair; and his brother, Michael Connor of El Paso, TX. He was preceded in death by his four year old daughter, Elizabeth Ann Connor; his parents; and sister-in-law, Lyra Connor.

Don J. Connor, 69, of Humboldt, passed away October 23, 2017 at the Humboldt County Memorial Hospital. Funeral services will be 11 a.m. Thursday, October 26, 2017 at the Congregational United Church of Christ in Humboldt with the Rev.... View Obituary & Service Information

The family of Don J. Connor created this Life Tributes page to make it easy to share your memories.

Send flowers to the Connor family.