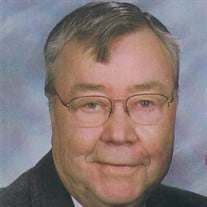 Douglas Lundberg, 88 of Humboldt, passed away on Tuesday, October 13, 2020 at the Humboldt County Memorial Hospital. He was born November 21, 1931 in Forest City, the son of Harmon and Ruth (Olson) Lundberg. After graduating from Forest City High School in 1950, he joined the U.S. Army serving as a Corporal. December 21, 1958 he was united in marriage to Phyllis Boland at the Peace Reformed Church in Garner, Iowa. Douglas continued his education at Waldorf College receiving an Associate in Business. He went on to receive a Bachelor of Science degree in Business Administration from the University of South Dakota and a Master of Science degree in Business Education from the University of Northern Iowa. He held jobs at Anderson’s Clothing Store in Forest City, U.S. Steel in Duluth, Minnesota and Theo Stark and Co., in Minneapolis, Minnesota. He taught business subjects in New Hampton, Iowa and Accounting and Driver’s Ed for 24 years in Humboldt teaching over 1500 students to drive. Douglas was a member of the Zion Lutheran Church and served as an Elder and Assistant Financial Secretary for the church. His hobbies included golf, wood working, reading and playing pool. He is survived by his wife Phyllis, daughters Julie Howell of Manson, Iowa, Ann (John) Haack of St. Louis, Missouri, grandsons Joshua (Kristine) Howell of Moorland, Jordan (Ellie) Howell Cedar Rapids, Thomas, Daniel and William Haack of St. Louis, Missouri and one great grandson Hayes Howell. Douglas was preceded in death by his parents, an infant son, brother James, sister Daryl Narveson, brother-in-law John Narveson, , son-in-law Charles Howell and several nieces and nephews. Funeral Services and burial will be at 1:30pm, Monday, October 19th at the Oakland Cemetery in Forest City, Iowa. Mason-Lindhart Funeral Home will be assisting the family.

Douglas Lundberg, 88 of Humboldt, passed away on Tuesday, October 13, 2020 at the Humboldt County Memorial Hospital. He was born November 21, 1931 in Forest City, the son of Harmon and Ruth (Olson) Lundberg. After graduating from Forest City... View Obituary & Service Information

The family of Doug A. Lundberg created this Life Tributes page to make it easy to share your memories.

Douglas Lundberg, 88 of Humboldt, passed away on Tuesday, October...

Send flowers to the Lundberg family.