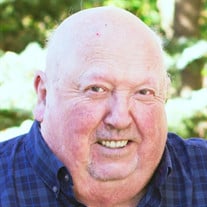 Duane was born on a farm near Badger on 4-19-34 to Gustav and Julia Annetta (Nettie) Larson. He was the 9th out of 10 children born to the family. Duane attended Fort Dodge Schools through the 10th grade, when he left to begin working with a civil engineer. When he turned 18, Duane began working at W&H Co-op in Badger. In 1960, Duane was promoted and became the manager of W & H Co-op in Goldfield. He worked for W & H for a total of 36 years. During this time, he also became a substitute rural mail carrier. Upon his retirement from W&H, he began working as a full-time rural mail carrier, retiring after a total of 20 years of service for the US Postal Service. After retiring from the USPS, Duane and Barb delivered Born Free motor homes across the country. In his spare time, Duane was able to remodel several homes in Goldfield. He also did the majority of the construction work on two of the family homes over the years. He spent many hours in his workshop on woodworking projects for the home and for his children and grandchildren. In later years, Duane's faithful canine companion, Suzie, was always by his side. He was often bragging about her amazing talents. Duane's testimony was that the Spirit of God began speaking to his spirit at around 13 years of age but, that he kept on living on the worldly side of life. When the Spirit would convict him, he would promise that at 21 he would accept Christ. When the age of 21 got close, he then changed it, promising that he would follow the Lord after he got married. God took care of him until the time of his conversion. In August of 1956, two months after being married, Duane and Barb accepted the Lord as their Savior at LEM Meetings in Eagle Grove. He was thankful that God was faithful to him all of his life. Duane married Barbara Kaslin on June 24, 1956, and to this union six children were born – Michael (Jurine) Larson, Jane (Peder) Bjorbekk, Julie Larson, Carolyn (Mark) Olson, Richard Larson and Robert Larson. Duane is survived by his wife, Barbara, their six children, 10 grandchildren and 9 great-grandchildren and his sister, Ellen Jane Lemberg. Duane was preceded in death by his parents, his brothers – Lloyd, Alvin, Glenn, Irving, Norman and Howard, and two of his sisters – Alenor Askelson and Charlene Hilstad. He was also preceded in death by his grandson, Brycen Olson, and his son-in-law, Peder Bjorbekk. Duane held several volunteer positions while living in Goldfield. He served on the Goldfield City Council for 14 years, Goldfield Fire Dept for 25 years and the Goldfield low rent housing board for 40 years. He held various positions within Hauge Lutheran Church in Goldfield – President, Vice President, Trustee and Treasurer. Services will be at 11:00 a.m. on Monday, December 21st at the Mason-Lindhart Funeral & Cremation Service in Humboldt. Visitation will be from 10:00 a.m. until the time of the service. Burial will be in the Goldfield Cemetery. www.masonlindhart.com

Duane was born on a farm near Badger on 4-19-34 to Gustav and Julia Annetta (Nettie) Larson. He was the 9th out of 10 children born to the family. Duane attended Fort Dodge Schools through the 10th grade, when he left to begin working with... View Obituary & Service Information

The family of Duane R. Larson created this Life Tributes page to make it easy to share your memories.

Send flowers to the Larson family.