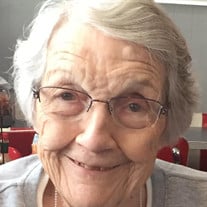 Edith “Lucille” Eastman Werner, 96 of Humboldt, passed away in hospice care on Monday, January 14, 2019 at the Humboldt County Memorial Hospital. She was born December 11, 1922 in Humboldt to Orville and Ella (Mattot) Eastman. She attended country school and graduated from Humboldt High School in 1940. Following graduation, she worked in the area and later at the ammunitions plant in Ankeny. In July of 1944 she joined the United States Navy WAVES and was stationed at Shoemaker Naval Hospital in California. She was honorably discharged in February of 1946 and remained in the Bay Area of San Francisco. She married William Van Alstyne that same year and the marriage was later dissolved. She then met and married Ervin "Bud" Werner. Lucille worked for Alameda County in Oakland, California as a municipal court clerk for 23 years, retiring in 1984. She retired in the Bay area until returning to Humboldt 1996 after 52 years in California. She was a member of Faith United Methodist Church, HCMH Auxiliary and WAVES National. She is survived by her son, Bill Gilk of Lake City, Minnesota, her step-daughter, Lynne (Gene) Mouw of Saint Ansgar, Iowa, two grandchildren, two great-grandchildren and many nieces, nephews and friends. She was preceded in death by her parents, husband, Bud, sister, Genevieve (Eastman) Baldwin and her brothers, Robert and Homer Eastman. A Memorial Gathering will be held from 1:30 - 3:00 p.m. on Saturday, January 26, 2019 at the Springvale Assisted Living Facility in Humboldt. www.masonlindhart.com

Edith &#8220;Lucille&#8221; Eastman Werner, 96 of Humboldt, passed away in hospice care on Monday, January 14, 2019 at the Humboldt County Memorial Hospital. She was born December 11, 1922 in Humboldt to Orville and Ella (Mattot) Eastman.... View Obituary & Service Information

The family of Edith "Lucille" Werner created this Life Tributes page to make it easy to share your memories.

Edith “Lucille” Eastman Werner, 96 of Humboldt, passed away in...

Send flowers to the Werner family.