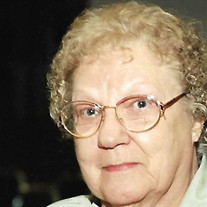 Eleanore P. Hoffman of Humboldt, Iowa died August 22, 2017. Eleanore was 96 years old. She was born on May 24, 1921 in Chicago, IL. The daughter of the Late George and Agnes Hoffman. Eleanore had two brothers, they are John “Jack” Hoffman (Deceased) and Albert G. Hoffman (Deceased) both her brothers served in the United States Army in Korea. Eleanore was married twice, once to Jerome “Benny” Janusz, who served during WWII in the Pacific Islands and widowed from George Rapp of Deerbrook, Wisconsin. She was preceded in death by her Daughter, Jacqueline Janusz in 1989. Eleanore worked as part of a secretarial pool for several companies in Chicago, IL and Caretaker/Companion in Beverly Hills, CA. She retired in the 1980’s. Eleanore lived in Beverly Hills, Burbank, and eventually Lancaster, California with her Grandson Barry Ellis and his wife Connie, as well as her Great Grandsons (Stephen, Jason, Markus and Nick Ellis, also with Step-Grandchildren Rebecca, Alisha and Gregory Reyes). A trip would later take her with her family, then of 4 of the grandchildren, on a cross country move to live in Humboldt, Iowa where she would end her journey of 96 years. She lived with her Grandson and his wife for 13 plus years, being by her side to the end. Eleanore would see in her life time 16 Presidents, 48 Armed Conflicts, War and Advisements (Combined) involving the United States of America, she also survived the Great Depression of 1929-1939. Eleanore loved to hunt with the guys in Wisconsin, danced at the Aragon Ballroom in Antigo, Wisconsin, earning a Dance Pin there. She enjoyed playing cards with her friends in Lancaster, CA at the senior center daily, and especially playing Euchre with her Great Grandchildren every holiday. She was so very proud of her Great Grandchildren when her two oldest great grandchildren, Stephen and Jason Ellis took a cross country trip to come visit her surprisingly. She was loved by many, and “The Hussy” will surely be missed Memorials may be made to Gateway Hospice or the Alzheimers Association.

The family of Eleanore P. Hoffman created this Life Tributes page to make it easy to share your memories.

Send flowers to the Hoffman family.