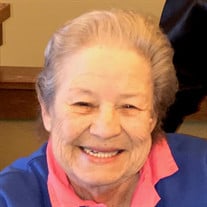 Elsie L. Cassens, 81, of Humboldt, passed away April 19, 2018 at the Kossuth County Regional Medical Center in Algona. Funeral services will be 11 am Thursday, April 26, 2018 in the chapel of the Mason-Lindhart Funeral Home in Humboldt. Burial is in Union Cemetery, Humboldt. Visitation is from 5-7 p.m. Wednesday at the funeral home. Elsie Lee Baker was born on February 25, 1937 at Elgin, Texas. She was raised and educated in the Elgin and Waco, Texas areas. On March 26, 1955, she was united in marriage to Ronald S. Cassens at Miami, Oklahoma. The couple made their home at George, Iowa and Elsie worked for the Campbell’s Soup Co. and Sathers Candy Co. in Worthington, MN. In 1977, the family moved to Dakota City and Elsie was employed at Dodgen Industries for a time. She was also very supportive of her husband as he established his business, R&J Material Handling Co. in Fort Dodge. Ron passed away in April of 1998 and Elsie continued to maintain her home until moving to Humboldt. She became a resident of Windsor Manor in Algona in October of 2016. Elsie enjoyed playing bingo, trips to Prairie Meadows, and maintaining her yard. Above all, she enjoyed the time she spent with her grandchildren. She is survived by her three sons, Robert (Charinne) Cassens of Henderson, NV, Dave (Tracy) Cassens of Twin Lakes, and James (Lisa) Cassens of Algona; grandchildren, Taryn (Nate) Myer, MacKenzie Cassens, and Morganne Cassens; and great grandson, Quin Myer and a great granddaughter due in May. She was preceded in death by her parents; sister, Dorothy Sturdivant; and brother, Carl Baker.

Elsie L. Cassens, 81, of Humboldt, passed away April 19, 2018 at the Kossuth County Regional Medical Center in Algona. Funeral services will be 11 am Thursday, April 26, 2018 in the chapel of the Mason-Lindhart Funeral Home in Humboldt.... View Obituary & Service Information

The family of Elsie Lee Cassens created this Life Tributes page to make it easy to share your memories.

Send flowers to the Cassens family.