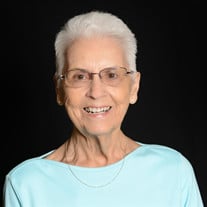 Fern C. Furst, 85 of Fort Dodge, formerly of Humboldt, passed away on Monday evening, November 12, 2018 at Friendship Haven in Fort Dodge. She was born September 26, 1933 in Bancroft, Iowa, the daughter of Fred and Charlotte (Bond) Habeger. She spent her early years on a farm near Bancroft and attended country school near Bancroft. The family later moved to Burt and she graduated from Burt High School in 1951. She then graduated from Iowa State Teacher’s College in Cedar Falls. She was united in marriage to Richard J. Furst on July 10, 1955 in Burt. The couple made their home in Humboldt and Fern taught 2nd grade, first at Renwick, then Taft Elementary when it opened in Humboldt. After raising daughters in their early years, she became a substitute teacher in the Humboldt School System. For the last 30 years of her career, she served as the Deputy Auditor of Humboldt County. Fern had been a member of a dance band in her early years called, “Gloom Chasers”, she also had been a member of 4-H, showed beef cattle and had a grand champion steer at the Kossuth County Fair in 1952. She liked to travel and especially enjoyed coffee with friends and time with family. She is survived by her daughters, DeAnna (Jim) Luciow of Petoskey, Michigan and Denise (Korey) Schroeder of Stockbridge, Georgia, her grandson, Jack Richard Luciow, her brother, Duane (Shirley) Habeger of Algona, many nieces and nephews and her friend and special companion, Clyde Farmer. She was preceded in death by her husband, Richard, her granddaughter, Hannah Suzanne Schroeder, her sister, Frances Sarchet and her nephews, Kent Habeger and Marc Sarchet. Visitation will be from 11:00 a.m. until the time of the 12:00 noon Funeral Service, Sunday, November 18th in the Celebration Center of Friendship Haven, Fort Dodge. Burial will be in East Lawn Cemetery, Algona. Memorials in Fern’s name may be made to the Good Samaritan Fund at Friendship Haven or Stand Up To Cancer. www.masonlindhart.com

Fern C. Furst, 85 of Fort Dodge, formerly of Humboldt, passed away on Monday evening, November 12, 2018 at Friendship Haven in Fort Dodge. She was born September 26, 1933 in Bancroft, Iowa, the daughter of Fred and Charlotte (Bond) Habeger.... View Obituary & Service Information

The family of Fern C. Furst created this Life Tributes page to make it easy to share your memories.

Send flowers to the Furst family.