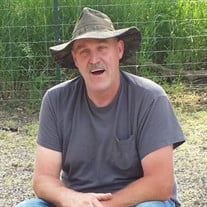 Frank J. Hacker, 61, of Ottosen passed away on Friday, September 18, 2020 at University of Iowa Hospital in Iowa City. Frank was born on April 25, 1959 in Fort Dodge, the son of Virgil and Lola (Boyden) Hacker. He grew up on the family farm where he enjoyed playing with his cousins and was very active with horses. After high school, he attended college in Emmetsburg for two years in mechanics. After college, Frank began working for Bennett Sanitation in Ottosen where he worked up until this past year. He met Virginia Pylypczuk in 1993 and the two were married on February 12, 1994. They planted their roots in Ottosen where they remained, Frank’s love for Virginia was something everyone would describe as very special. Once married, Frank became an immediate father and he loved to play with his children and teach sons to fix cars. He also enjoyed playing football with his children and the neighborhood kids. Frank loved camping, gardening, playing rook and cribbage, his kids and grandchildren, and his dog Gus. Frank is described as a fighter, cancer survivor, honest, genuine, and his infectious laugh will be missed by his family and friends. If you weren’t Frank’s friend, you would leave his company being his friend. Frank is survived by his wife Virginia, children Justen (Jessica) VanVacter of Fort Dodge, Leah (Matthew) Gaillard of Fort Dodge, Caleb (Elycia Ahl) VanVacter of Des Moines and Madison Hacker of Ottosen, siblings Marsha Hacker of Gilmore City, Rodney Hacker of Oskaloosa, Virgil (Mary) Hacker Jr. of Dakota City and Denise Hacker of Ottosen, grandchildren Alayna, Oliver, Isla and Elowyn Gaillard and Joseph Haley, along with many nieces and nephews and cousins. He is preceded in death by his parents and sister-in-law Pat Hacker. Memorial Fund Donations to Frank's family may be submitted to West Iowa Bank under Frank's name. Visitation will be held on Friday, September 25th from 4-7 p.m. at the Mason-Lindhart Funeral Home in Humboldt. Funeral services will be held on Saturday, September 26th at 10:30 a.m. at Trinity Lutheran Church in Ottosen. Burial will be held after services in Union Cemetery in Ottosen.

Frank J. Hacker, 61, of Ottosen passed away on Friday, September 18, 2020 at University of Iowa Hospital in Iowa City. Frank was born on April 25, 1959 in Fort Dodge, the son of Virgil and Lola (Boyden) Hacker. He grew up on the family farm... View Obituary & Service Information

The family of Frank J. Hacker created this Life Tributes page to make it easy to share your memories.

Frank J. Hacker, 61, of Ottosen passed away on Friday, September...

Send flowers to the Hacker family.