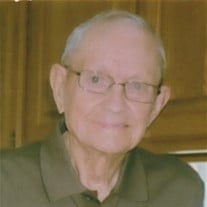 George F. Markman, 96, of Renwick, passed away November 16, 2016 at the Long Term Care Unit of the Humboldt County Memorial Hospital. Funeral services will be 2:00 p.m. Saturday, November 19, 2016 at St. Paul’s Lutheran Church in Renwick. Burial will be in Vernon Township Cemetery, Renwick with full military rites by Adams American Legion Post 119 and Sathers-Odgaard VFW Post 5240. Visitation is from 5-7 p.m. Friday at the Mason-Lindhart Funeral Home in Humboldt. Mr. Markman is survived by his wife, Vivian; his son, Roger (Ramona) Markman of Renwick; daughter, Renee (Rick) Boevers of Nerstrand, MN; grandchildren, Benjamin (Tasha) Markman and Matthew (Cassie) Markman both of Sioux Falls, SD; and great grandchildren, Hannah, Austin, Samuel, and Jett. He was preceded in death by his parents; daughter, Diane; and brothers, Ervin and Leonard. George Frederick Markman, the son of Frederick and Katherine (Bannick) Markman, was born March 28, 1920 on a farm near LuVerne, Iowa. When George was a child, the family moved to a farm west of Renwick. He attended Vernon Consolidated School graduating in 1938. Following his education, George worked as a carpenter for Fritz Gugger in Renwick. On March 23, 1942, he enlisted into the United States Army. He received his basic training in Louisiana and Texas where he became a part of the 90th Infantry and was sent to Europe during World War II. George was among the soldiers in the 3rd assault wave on Utah Beach on D-Day and later fought in the Battle of the Bulge. He was wounded by a land mine in France, which led to his honorable discharge on April 1, 1945 after receiving 3 Bronze Stars, the Purple Heart, and a D-Day Medal. George returned home to farm following 2 years, 1 month, and 27 days of active service. On February 14, 1948, he was united in marriage to Vivian Thompson and the couple made their home in Renwick where they started their family. They then moved to the family farm where they remained for most of the rest of their married lives. George was a member of St. Paul’s Lutheran Church where he served numerous terms on the church council. He was a member of Harvey-McPeak American Legion in Renwick and a charter member of the Oakdale Izaak Walton League. He was also a 60-year board member of the Boone Valley COOP soybean processing plant in Eagle Grove. George enjoyed woodworking and loved to go fishing, whether in Canada or off the dock of their lake home at Twin Lakes and especially loved taking his grandsons. He will be greatly missed by his family.

The family of George Frederick Markman created this Life Tributes page to make it easy to share your memories.

Send flowers to the Markman family.