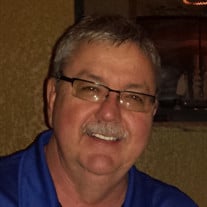 Harold M. Hofer, 63, of Bode, passed away September 12, 2016 at the Kossuth Regional Health Center in Algona. A Mass of Christian Burial celebrated by Father Brian Danner, will be 10:30 a.m. Saturday, September 17th, at Sacred Heart Catholic Church in Livermore. Burial will be in St. Olaf Cemetery, Bode. Visitation is from 4-8 p.m. Friday at the church. Otto Field The American Legion Post 415, The American Legion Auxilary, Unit 415, and The Sons Of The American Legion Squadron 415 will provide rites at 7 p.m. Friday at the church. The Mason-Lindhart Funeral Home is assisting the family. Harold is survived by his wife, Becky of Bode; his children, Casey (Tim) Fisher of Altoona and Tyler (Laura Kelley) of Fort Dodge; sister, Ruth Brunsen of Algona; his twin brother, Darold (Ellen) Hofer of Livermore; and sister-in-law, Kim Gifford of Somer, IA. He was preceded in death by his parents, Mike and Florence (Thilges) Hofer; mother-in-law and father-in-law, Charlotte and Bernie Bjornson; brother-in-law, Dale Brunsen; sisters-in-law, Sharon Hanrahan, Carol Ann Pisel, and Marsha Will; and his niece, Michelle Block. Harold Michael Hofer, the son of Mike and Florence (Thilges) Hofer, was born August 25, 1953 at Algona, Iowa. He was raised on a farm north of St. Joe and graduated from Garrigan High School with the class of 1972. He worked for a brief time at the fertilizer plant in Bode before joining Snap-On Tools in Algona where he remained for nearly 44 years. On July 19, 1975, Harold was united in marriage to Becky Bjornson at St. Joseph’s Catholic Church at St. Joe. The couple made their home at St. Joe for 3 years until moving to Livermore in 1978. In 2004, they built their home near Bode. Harold was a member of Sacred Heart Catholic Church in Livermore where he was a past member of the church council. He was an avid Hawkeye fan, attending many home games, and following the team to Hawaii, 2 rose bowls, and the orange bowl. He enjoyed the outdoors, fishing, hunting, and working in his vegetable garden and loved to attend his children’s activities. He was a member of the National Association of Machinists, served as Vice President of the TRV Athletic Boosters, served for 12 years on the Livermore City Council, and was a member of the Sons of the American Legion.

The family of Harold Michael Hofer created this Life Tributes page to make it easy to share your memories.

Send flowers to the Hofer family.