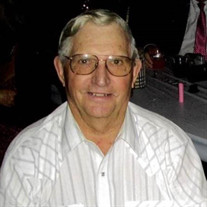 Harry Donavon Nielsen, 95, of Gilmore City passed away on Wednesday, October 28, 2020 at the Humboldt County Memorial Hospital. Harry was born on January 2, 1925 near Ayrshire, Iowa. In 1937, his parents moved their family, of four sons, to the Gilmore City area where Harry Nielsen remained until his death. As a boy, Harry had a penchant for baseball. He attended school in Bradgate until his graduation in 1944. The next year, in January 1945, Harry enlisted in the United States Marine Corps and served in the Pacific Front during World War II. Upon his discharge in November 1946, the young Marine received a letter from President Truman thanking him for his service and calling upon his continued leadership and service to country. For Nielsen, that looked like a lifetime of hard work in his farm fields and steadfast devotion to his family. In 1951, Nielsen wed Shirley Seaver. Together, they raised six children and kept up the farm in the Gilmore City/Bradgate area, where Harry put in long days of labor well into his 80s. After the last of the livestock was sold off, he continued to carefully tend to his crops, while also putting out the occasional bowl of food for the kittens and growing pumpkins for his grandchildren. Navigating the land from behind the wheel of a golfcart, he kept himself busy with projects and checking on his apple trees. He was a fan of baseball and Western movies, a bolo-tie wearer, a legendary hugger, the head of a large sprawling family and a man of faith. He is survived by his wife of nearly 70 years Shirley, his children Terrie (Roger) Allen of Pocahontas, Christy Jensen of San Juan Bautista, California, Lynn (Dan) Hall of Johnston, Sandra (Pat) Dunn of Bedford, Texas, Paul (Nancy) Nielsen of Bradgate and Patricia (Mike) Kueppers of Lino Lakes, Minnesota, 14 grandchildren and 25 great-grandchildren. He is preceded in death by his parents Chris and Edith Nielsen, brothers Julius, Floyd, Fred and Earl Nielsen, granddaughter Amanda Hall Morrell and great-granddaughter Afton Allen. The Nielsen family requests memorials be made to the Make A Wish Foundation Private Family Services will be held. Funeral Services may be found on our Facebook page on Saturday at: https://www.facebook.com/Mason-Lindhart-Funeral-Home-113794565318403

Harry Donavon Nielsen, 95, of Gilmore City passed away on Wednesday, October 28, 2020 at the Humboldt County Memorial Hospital. Harry was born on January 2, 1925 near Ayrshire, Iowa. In 1937, his parents moved their family, of four sons, to... View Obituary & Service Information

The family of Harry D Nielsen created this Life Tributes page to make it easy to share your memories.

Harry Donavon Nielsen, 95, of Gilmore City passed away on Wednesday,...

Send flowers to the Nielsen family.