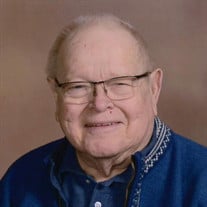 It has pleased Almighty God to call from this vale of tears to Himself in heaven the soul of James (Jim) Peter Helvick, who died Monday morning, July 6, 2020, at Humboldt County Memorial Hospital, Humboldt, with his family by his side. He was eighty-two years old. James Peter Helvick was born February 24, 1938, to Peter and Josephine (Michaelson) Helvick near Hardy, Iowa. He was baptized March, 1938, at Hardy Trinity Lutheran and confirmed April, 1953, First Lutheran Church in Humboldt. He graduated from Humboldt High School in 1956 and then attended college at Iowa State Teachers College, now UNI, at Cedar Falls, Iowa, graduating in 1960. His teaching career led him to Garner, Iowa, and then St. Paul, Minnesota. He returned to Iowa State University, Ames, Iowa, earning his Master’s Degree. Following ISU, he taught over 20 years in Marshalltown, Iowa, before retiring from his math career. He loved working with numbers and in retirement was involved with AARP and then his own JPH Tax Service, preparing taxes for many. During his AARP work he was involved with the training of fellow tax preparers in a four state area. Through AARP, Jim was awarded the Star Partner Award as an IRS Volunteer in 2005 and then awarded the Andrus Award for Community Service in 2010. He had done tax work for 50 years! Jim was proud of his Norwegian heritage and loved any family celebration. He will be remembered for his cooking, singing, and traveling! One such travel took him to Norway. He was a member of Zion Evangelical Lutheran Church of Humboldt where he had served as president of the congregation and sang faithfully with the church choir. Those left to cherish his memory are his sisters, Gloria (Marlo)Westaby of Madrid; Diane (Wayne) Lehman of Badger; sister-in-law, Neva Helvick of Humboldt, Iowa, along with numerous nieces, nephews, cousins and many dear friends. Jim was preceded in death by his parents Peter and Josephine Helvick, his sister Joyce (Duane) Jordanger; his brothers, Clayton (Benita) and Malcolm Helvick; nephew, Scott Helvick and niece, Joni Helvick; and great-niece Alayna Decker. A Memorial Service will be held at 2:00 p.m., Saturday, July 11th at Zion Lutheran Church in Humboldt. Visitation will be after 1:00 pm. at the church. The church asks that masks be worn. Burial will be at Trinity Lutheran Cemetery, Hardy. www.masonlindhart.com

It has pleased Almighty God to call from this vale of tears to Himself in heaven the soul of James (Jim) Peter Helvick, who died Monday morning, July 6, 2020, at Humboldt County Memorial Hospital, Humboldt, with his family by his side. He was... View Obituary & Service Information

The family of James P. Helvick created this Life Tributes page to make it easy to share your memories.

It has pleased Almighty God to call from this vale of tears to...

Send flowers to the Helvick family.