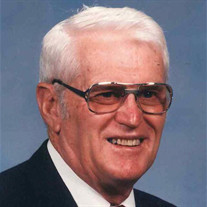 JAMES MOLINE - HUMBOLDT James Moline of Humboldt, Iowa died on Monday morning April 15, 2019 of great age at the North Care Center, Humboldt, Iowa. Funeral Services will be held Monday, April 22, 2019 at 11:00 a.m. at Our Saviour's Lutheran Church in Humboldt, Iowa. Visitation will be one hour prior to the funeral service at the church. Burial will be in Rose Hill Cemetery, Manson. www.masonlindhart.com James (Jim) Moline was born on July 9, 1923 to Harold and Kathryn (Onnen) Moline in their farm home. Jim attended "country" school in the Knierim area and went on to attend and graduate from Manson High School in 1941. In 1943, Jim was drafted to serve in the United States Army. After completing his training, Jim served in the 17th Airborne Division as a Glider Infantryman. In March of 1945, Jim took part in one of the last major air drops of World War II, Operation Varsity. Jim and his unit crossed the Rhine River at Russel, Germany in a glider on March 25, 1945. Jim was awarded the Bronze Star as a result of his participation in the battle. After his service was completed, Jim returned to the Manson, Iowa area and started his life-long career as a farmer. On August 31, 1957, Jim married Margaret Hockel at the Trinity Lutheran Church located in rural Hardy, Iowa. In August, 1960, Jim and Margaret were blessed with twin sons, Stephen and Scott. In March, 1961, Jim and new young family moved to a farm they purchased in rural Rolfe, Iowa where they were members of St. Paul's Lutheran Church and were active participants in both church-related and other local community organizations. Jim is survived by sister Norma Hoag; his sons Stephen (Kathryn) Moline and Scott (Jayne Tabor-Moline) Moline; grandchildren Jake (Maddy) Moline, Adam (fiance Andjelka Radevic) Moline, Maggie (Matts Fibiger) Moline, and Dan (significant-other Anna Staudacher) Moline; great-granddaughter Hazel Mae Moline and his companion of many years Bonnie Gates. Jim was preceded in death by his wife Margaret (Hockel) Moline and siblings Marguerite Fey, and Mary Jean Birkey.

The family of James M. Moline created this Life Tributes page to make it easy to share your memories.

Send flowers to the Moline family.