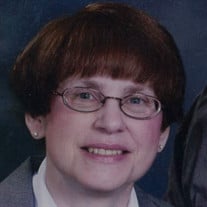 Janet Enger Moench, 64, of Nevada, formerly of Humboldt, passed away on Friday, February 1, 2019 at the Story County Medical Center. Janet Lee Enger was born on December 11, 1954 in Fort Dodge, Iowa to her parents, A. LeRoy and Lorraine (Babe) Enger of Bode. The second of three children, Janet grew up on a family farm on the outskirts of Bode with her older sister Jo Ann and younger brother Jeff. Janet’s parents raised their children to work hard, enjoy farm life, love their family, and believe in the promise of God’s endless love and mercy. Janet was a lifelong member of St. Olaf Lutheran Church in Bode where she attended Sunday School, was confirmed, and participated in Chi-Centra Singers with Jo Ann and Jeff. She graduated from Twin Rivers High School in 1973, the same year she was named Humboldt County Fair Queen. She went on to earn her LPN designation from Iowa Lakes Community College. In 2002, Janet was joined in Christian marriage with her late husband, Dennis Moench. In Janet’s later years, she enjoyed spending time with her two great-nephews, Joey and Michael Harman, whom she showered with love and affection whenever possible. Janet’s endless faith and love of God and Jesus were ever present in what many would describe as a life riddled with challenges and blessings. The many health ailments that she battled over the years only grew her desire to one day meet The Lord and reunite with her family and loved ones in Heaven. Janet was preceded in death by her parents, siblings, and husband. She is survived by her nephew and niece-in-law, Rich and Molly Harman and great-nephews as well as many treasured friends. Visitation will be from 9:30 a.m. until the time of the 10:30 a.m. Funeral Service on Saturday, February 9th at St. Olaf Lutheran Church in Bode. Burial will be in St. Olaf Cemetery in Bode. www.masonlindhart.com

Janet Enger Moench, 64, of Nevada, formerly of Humboldt, passed away on Friday, February 1, 2019 at the Story County Medical Center. Janet Lee Enger was born on December 11, 1954 in Fort Dodge, Iowa to her parents, A. LeRoy and Lorraine (Babe)... View Obituary & Service Information

The family of Janet Enger Moench created this Life Tributes page to make it easy to share your memories.

Send flowers to the Moench family.