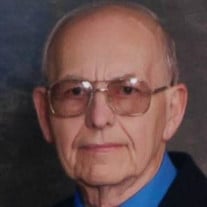 Jerry C. Diedrick, 83, of Humboldt, passed away on Tuesday, December 3, 2019 at the Humboldt County Memorial Hospital. He was born on July 7, 1936 in Vesta, Minnesota to Julius and Cora (Lecy) Diedrick. His family then moved to Courtland where he attended school and graduated from New Ulm High School. Jerry then attended Mankato State University obtaining his bachelor’s degree in science. He accepted a teaching position in Edgar, Wisconsin where he met his wife, Rose Mary Opichka. The two were married on June 5, 1961. They then moved to Emmetsburg, Iowa after Jerry accepted a high school teaching position there, and earned his master’s degree from Mankato State. He also taught at Iowa Lakes Community College. In 1973 he and his wife purchased the Corner Inn Motel relocating the family to Humboldt. They owned and operated the motel thru December of 2000. During this time, Jerry joined the Humboldt County Assessor's Office. He then went on to hold the position as the Humboldt County Sanitarian. In 1980 he ran and was elected as Humboldt County Auditor holding that office for over 15 years before retiring. Jerry was an avid gardener and loved to travel, especially to Norway and Jerusalem. He served as an elder at Zion Lutheran Church and was active in Kiwanis in Humboldt. Jerry is survived by his wife Rose Mary; his sons Frank (Olga) Diedrick of Fayetteville, NC, Eric (Amy) Diedrick of Matthews, NC and Christopher (Ashley) Diedrick of Humboldt; grandchildren Victoria Slinkard, Ross Slinkard, Gunnar Diedrick, Cora Diedrick, Danica Diedrick and Jerrod Diedrick; siblings Corrine (Warren) Schnobrich, Mary Ann Zamzow and Thomas (Mavis) Diedrick. He was preceded in death by his parents and daughter, Cecilia Diedrick-Slinkard. Funeral services will be held on Monday, December 9 at 11:00 A.M. at Zion Lutheran Church in Humboldt. A visitation will be held on Sunday, December 8 from 4-6 P.M. at the Mason-Lindhart Funeral Home. Burial will be held at Indian Mound Cemetery in Humboldt.

Jerry C. Diedrick, 83, of Humboldt, passed away on Tuesday, December 3, 2019 at the Humboldt County Memorial Hospital. He was born on July 7, 1936 in Vesta, Minnesota to Julius and Cora (Lecy) Diedrick. His family then moved to Courtland... View Obituary & Service Information

The family of Jerry C. Diedrick created this Life Tributes page to make it easy to share your memories.

Jerry C. Diedrick, 83, of Humboldt, passed away on Tuesday, December...

Send flowers to the Diedrick family.