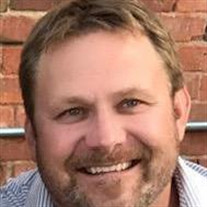 Joel M. Haynes, 45 of Bode, passed away on Saturday, November 16, 2019 from injuries received in an automobile accident. Joel was born March 4th, 1974 in Humboldt, Iowa to Kent (Buck) and Stephanie(Miner) Haynes. He grew up in Humboldt. He moved to California for a time and returned to Humboldt where he graduated from Humboldt High School. He played football for Iowa Central Community College, transferred to Iowa State University and finished his schooling as a Lineman in Sheldon, Iowa. He was united in marriage to the love of his life, Dianna L. Weydert, on August 11,2001 at Sacred Heart in Livermore, Iowa. Joel worked as an Outage Coordinator for Corn Belt Power Company in Humboldt. Joel was an avid outdoorsman and enjoyed trapping, hunting and trapshooting. Family and friends were the center of his life as he loved watching his daughters excel in many athletic activities. He appreciated his time chatting with the older generation in addition to playing guitar and singing to every country song. Joel is survived by his wife, Dianna and daughters, Ryan & Reagan, his mother, Stephanie Haynes of Lake Havasu City, Arizona, his grandmother, Marcene Smith of Humboldt, his sisters, Celeste (John) Schenone of Lake Havasu City, Arizona and Tammy (Mark) Thompson of Branson, Missouri. He also married into six brothers, Doug Weydert (Tricia) of Branson, Missouri, David Weydert (Jackie) of St. Louis, Missouri, Danny Weydert (Toni) of Montgomery, Minnesota, Dean Weydert of West Bend, Darin Weydert of Bode and Dale Weydert of Seattle, Washington. He was preceded in death by his father, Kent (Buck) Haynes. Visitation was be held from 4:00 – 7:00 p.m. on Sunday, November 24th at St. Joseph Catholic Church in St. Joe. Visitation was also held from 1:00 p.m. on Monday until the 2:00 p.m. Funeral Mass at the church. Burial was in St. Joseph Cemetery. www.masonlindhart.com

Joel M. Haynes, 45 of Bode, passed away on Saturday, November 16, 2019 from injuries received in an automobile accident. Joel was born March 4th, 1974 in Humboldt, Iowa to Kent (Buck) and Stephanie(Miner) Haynes. He grew up in Humboldt. He... View Obituary & Service Information

The family of Joel M. Haynes created this Life Tributes page to make it easy to share your memories.

Joel M. Haynes, 45 of Bode, passed away on Saturday, November...

Send flowers to the Haynes family.