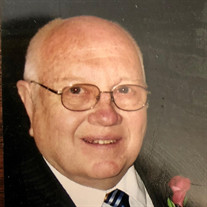 John Westphal, 82, of Humboldt passed away Monday, April 23, 2018 at the Humboldt Hospital. Born July 6, 1935, to Henry and Clara Westphal in Aurelia, Iowa, the youngest of six children. John left this earth with a strong faith in Christ. Visitation is from 5-7 p.m. Thursday at the Mason-Lindhart Funeral Home in Humboldt. Burial will be at 10 a.m. Friday in Union Cemetery, Humboldt. Funeral Services will be held on Friday, April 27, 2018 at 11 a.m. at Our Saviour’s Lutheran Church in Humboldt, Iowa. The family invites you to stay for lunch in the Fellowship Hall following the service. John is survived by his wife Charmaine, sons: Gary (Diane) Westphal of Ankeny and Kent (Jane) Westphal of Le Mars, daughter: Mary Westphal of Des Moines, grandchildren: Brooke (Nate) Gould of Ankeny, Michael Westphal of Ankeny, Scott (Whitney) Westphal of Omaha, Brad (Amanda) Westphal of Le Mars, and Tyler (Courtney) Westphal of Minneapolis; great-grandchildren: Daniel, Carter, Ethan, Parker, Elijah and Callie; sister-in-law Rosemary Westphal of Alta; and brother-in-law, Larry Daugherty. John was preceded in death by his parents, siblings: Melvina Honsbruch, Erma Stief, Evelyn Braunschweig, Arlen Westphal and Ervin Westphal. John found the greatest joys of his life to be family, friends and those who shared his love for sports. He tried to be subtle in teaching important life skills to his students, children and grandchildren. Faith in God was a guidepost for his life. John graduated from Aurelia High School in 1953, and from Westmar College in 1957. He earned a Master’s Degree in Guidance Counseling from Drake University. On August 18, 1956, John married Charmaine Daugherty in Kearney, Nebraska. He taught and coached boys basketball for 10 years in Albert City and for 28 years in Humboldt, and was the leading active Win-Leader at 522 and inducted into Iowa Basketball Coaches Hall of Fame in 1996. John was always quick to credit his success to outstanding players and assistant coaches. He retired as Guidance Counselor in 1999 and continued selling real estate for Smith Real Estate through 2014. Following retirement, John continued to enjoy and support the beloved “Wildcats”, as well as the many activities involving his children and grandchildren. Memorials will be made to causes important to John.

John Westphal, 82, of Humboldt passed away Monday, April 23, 2018 at the Humboldt Hospital. Born July 6, 1935, to Henry and Clara Westphal in Aurelia, Iowa, the youngest of six children. John left this earth with a strong faith in Christ.... View Obituary & Service Information

The family of John H. Westphal created this Life Tributes page to make it easy to share your memories.

Send flowers to the Westphal family.