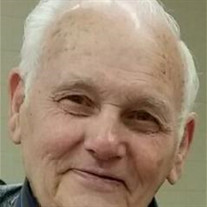 Kenneth Arnold Vorland, Sr., son of Helge and Louise (Thompson) Vorland, was born May 31, 1934 in Eagle Grove, Iowa. He was the youngest of 9 children and graduated from Vernon High School in 1953. On May 6, 1956, he was united in marriage to Marlene Johnson at Lake Lutheran Church in rural Goldfield, Iowa. They made their home on the family farm north of Hardy, Iowa where they raised three children. Kenny was a grain and livestock farmer but through the years he also was a bus driver for Boone Valley School and Humboldt Schools. He was always involved with church and music. He sang for hundreds of weddings and funerals during his lifetime and also participated in the Fort Dodge Choral Society, church choir and Cowboy Church. He was well known for his tenor voice and his harmonica playing as well as his smile and laugh. He entertained at countless nursing homes, fairs and other gatherings along with his wife and musician friends bringing joy to all who attended. In 2016 they moved off the farm due to health issues and resided in Humboldt. Kenny died on January 13, 2020 at home at age 85 surrounded by his loving wife of 63 years and their family. Kenny is survived by his wife, Marlene; three children, Kalene Greene (Dan Evenson), Kenny (Becky) Vorland, Jr. all from Humboldt and Kirk (Tammy) Vorland of Maysville, Kentucky; 7 grandchildren, Randy (Kristen), Corey (Angela) Greene, Brandon (Michelle), Clayton (Sierra), Bryce, Chandler Vorland and Saundra (Drue) Wood; 13 great grandchildren; Damien, Hayden, Dawson, Karley, Cainan, Brevan, Jace, Lexi, Lincoln, Ryerson, Kahler, Mila and Emmett; brother, Richard (Virginia) Vorland and many nieces and nephews. He is proceded in death by his granddaughter Stacy Jorgensen, sister Pearl McClamroch, and brothers Nels, Herman, Howard, Edmund, Glen and Eugene Vorland. Visitation will be at Mason-Lindhart Funeral Home in Humboldt Wednesday, January 15th at 4:00 – 7:00 p.m. Funeral services will be 2:00 p.m., Thursday, January 16th at Lake Lutheran Church in rural Goldfield with burial to follow at Lake Lutheran Church Cemetery. www.masonlindhart.com.

Kenneth Arnold Vorland, Sr., son of Helge and Louise (Thompson) Vorland, was born May 31, 1934 in Eagle Grove, Iowa. He was the youngest of 9 children and graduated from Vernon High School in 1953. On May 6, 1956, he was united in marriage... View Obituary & Service Information

The family of Kenneth Vorland created this Life Tributes page to make it easy to share your memories.

Send flowers to the Vorland family.