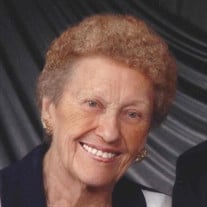 LaVon Lewellyn of Humboldt passed away September 11, 2017 at the Primrose Retirement Community in Sioux Falls, SD. Funeral services will be 11 a.m. Saturday, September 16, 2017 at the Faith United Methodist Church in Humboldt. Visitation is from 9:30 – 11 a.m. Saturday at the Church. Burial will be in the Ida Grove Cemetery, Ida Grove, Iowa. The Mason-Lindhart Funeral Home of Humboldt is in charge of arrangements. LaVon Hazzard was born at Ida Grove, Iowa on June 26, 1923 to James and Cecelia (Senhen) Hazzard. She attended schools in Ida Grove, Iowa and Scottsburg, Indiana. She graduated from Woodruff High School in Peoria, Illinois in 1941. LaVon married Clifford Lewellyn on August 28, 1943 at Hammer Field in Fresno, California where they made their home until Cliff was sent overseas during WWII. She worked at Vega AirCraft and was in charge of the Identification Bureau. LaVon returned to Iowa with her parents while Cliff was overseas. Cliff returned in November 1945. Cliff and Lavon lived in Sioux City, Ida Grove and Algona before settling in Humboldt in 1962 where they resided for the next 55 years. They moved to Springvale Independent Living in June of 2014 and moved to Primrose Assisted Living in Sioux Falls, South Dakota in May of 2017. LaVon was active in many community activities including the building of the Humboldt County Memorial Hospital. She served on the Hospital Board of Trustees for 20 years and the Hospital Auxiliary. She and Cliff served as escorts for NorthWest Iowa Tours of Ft. Dodge and traveled extensively for them on their tours. She enjoyed sewing and belonged to the Needlettes Club. LaVon loved to oil paint and generously shared her beautiful paintings with her family and friends. LaVon and Cliff loved spending time at Lake Okoboji and Clear Lake, Iowa with their family and friends and spent many hours boating. Both were active in league golf over their years in Humboldt. LaVon and Cliff have traveled to numerous countries during their lifetime. They had a group of friends that they traveled with and have many fond memories. LaVon enjoyed visiting her children, grandchildren and great grandchildren. She also enjoyed dog sitting for the many grand dogs she had over the years. LaVon and Cliff moved to Primrose Assisted Living facility in Sioux Falls, South Dakota in May of this year to be closer to her daughter Kathy and her family. She passed away there on Monday, September 11th, 2017 surrounded by family. LaVon is survived by her husband of 74 years Clifford, son, Craig (Muriel), Raleigh, North Carolina, daughter, Kathy (Douglas) Blomker, Harrisburg, SD, 7 grandchildren, Dariele Cooper, Dustin Lewellyn, Anna Jordal, Courtney Lewellyn, Kaitlyn Blomker, Piper Blomker, honorary grandson Ronald Blackman, 6 great grandchildren, Hannah Burchfield, Ethan Burchfield, Ben Cooper, Abigail Poston, Taylor Jordal, Graham Jordal. Lavon is preceded in death by her parents and son Gary. Memorials will be made to the LifeScape Foundation, 2011 west 26th street Suite 201, Sioux Falls SD 57105

The family of LaVon Lewellyn created this Life Tributes page to make it easy to share your memories.

Send flowers to the Lewellyn family.