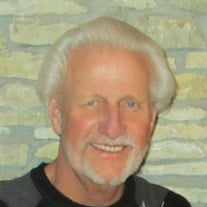 Leo F. Grebner, 78 of Humboldt, passed away on Thursday, January 14, 2021, at Trinity Regional Medical Center in Fort Dodge. Private family services will be held at 1:00 p.m. on Monday, January 18th at the Mason-Lindhart Funeral & Cremation Service, burial will be in Union Cemetery, Humboldt. A public Life Celebration will be held in the spring. Leo was born January 31, 1942 in Fort Dodge, the son of George and Elsie (Zabel) Grebner. He attended country school, Weaver #6, in Gilmore City for K-6 and later graduating from Humboldt High School in 1960. He was united in marriage to his high school sweetheart Linda Andrews on February 2, 1963, the California chick his friends said was unattainable. The couple moved to California for a time where Leo worked for General Motors. In 1966 they moved back to Humboldt where he worked for 24 years at Humboldt County Lumber. He then spent another 19 years working for the Humboldt Water Department. His passion was the 49 years he spent at the Humboldt County Dragway, every Saturday night greeting friends, both known and unknown, at the entry gate with his big smile. He is survived by his wife Linda, his children Rick (Shelley) Grebner of Mission Viejo, California, Jason (Crystal) Grebner of Rolfe, son-in-law Tom Fischer of Humboldt, grandchildren Nathan, Brandon, Tyler, Ryan, Madison and Braden, 5 great-grandchildren, his twin brother Larry Grebner and brother-in-law Dale Carman. He was preceded in death by his parents, daughter Cindy, sisters Betty Vought and Donna Carmen, his brother Marvin Grebner, brother-in-law’s John Vought and Russell Giddings, and sister-in-law’s Ione Grebner and Mary Lou Giddings. Leo had a zest for living, enjoying many of the simple things in life, whether it be his maniacally straight lines with the lawn mower, being the first in the neighborhood to remove snow, or sharing a cold one with family and friends. One of his true loves was the various automobiles he owned and built over the years. It was far more than the cars themselves, but the family bonds and friendships formed. The yearly family gatherings at Cruise to the Woods in Fort Dodge were always a highlight.   Leo will always be remembered for his always present electric smile, one finger wave and perfect white hair. The family hopes that his legacy will live on in each of us, learning that simple kindness, a smile, and a hand wave to perfect strangers can change the world and have profound impacts on the people around us. The family is eternally grateful to the outstanding doctors and nurses at Humboldt County Memorial Hospital and Trinity Regional Hospital in Fort Dodge, whose care and compassion for Leo touched their hearts. In lieu of flowers or memorials, the family asks for a donations in Leo’s name to the local hospital foundations. For on-line condolences and memorial information, visit: www.masonlindhart.com

The family of Leo Grebner created this Life Tributes page to make it easy to share your memories.

Leo F. Grebner, 78 of Humboldt, passed away on Thursday, January...

Send flowers to the Grebner family.