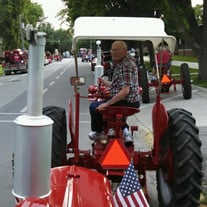 Louis A. Moritz, 89, of Humboldt, passed away October 30, 2016 at the Humboldt County Memorial Hospital. Funeral services will be 10:30 a.m. Wednesday at the Zion Lutheran Church in Humboldt with the Rev. Aaron Flatau officiating. Interment will be in St. John’s Cemetery, Palmer. Visitation is from 4 – 7 p.m. Tuesday at the church. The Mason-Lindhart Funeral Home of Humboldt is assisting the family. Mr. Moritz is survived by his wife of 66 years, Arlene of Humboldt; sons, Jerry M. Moritz of Humboldt and David L. (Diane) Moritz of Wilton, IA; grandchildren, Nina Shamon, Melody Moritz, Mackenzie Moritz, and Niki Cummins; great grandchildren, Kaylin and Jackson Shamon; and sister, Esther Ahlrich of Bloomingdale, IL. He was preceded in death by his parents; brothers, Walter and Donald; and infant sister, Mabel. Louis Albert Moritz, the son of Fred and Katherine (Johnson) Moritz, was born October 19, 1927 on a farm near Palmer in Pocahontas County and was baptized and confirmed at St. John’s Lutheran Church. He attended country schools near Palmer and graduated from Manson High School. Following his education, Louis began his career as a truck driver. On April 9, 1950, he was united in marriage to Arlene Schnell at Peace Lutheran Church in West Bend. The couple made their home in Fort Dodge where Louis worked as a driver for Gamble and Robinson Fruit and Vegetable Company. The couple began farming in the Palmer area until 1959 when Louis went to work in the petroleum business with Ray Wessels. In August of 1960, the family moved to Humboldt where Louis purchased the petroleum bulk plant and trucks, which he owned and operated until his retirement in 1989. Louis was a member of the Zion Lutheran Church where he served on the church council, Board of Trustees, and as a Sunday School Teacher. He was a past president of the Rotary Club and a Paul Harris Fellow. Louis loved his old tractors and participating in tractor rides. He also took an interest in cars and wooden boats with his sons and loved to take meticulous care of his equipment. He enjoyed coffee and fellowship with his friends and above all, he loved his family.

Louis A. Moritz, 89, of Humboldt, passed away October 30, 2016 at the Humboldt County Memorial Hospital. Funeral services will be 10:30 a.m. Wednesday at the Zion Lutheran Church in Humboldt with the Rev. Aaron Flatau officiating. Interment... View Obituary & Service Information

The family of Louis Albert Moritz created this Life Tributes page to make it easy to share your memories.

Send flowers to the Moritz family.