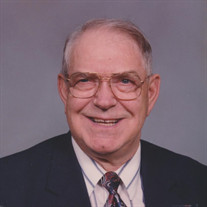 Lyle J. Miller, 94, of Humboldt, passed away June 9, 2016 at the Humboldt County Memorial Hospital. Funeral services, officiated by the Rev. Alberta Ervin, will be 10 a.m. Monday, June13, 2016 at the Faith United Methodist Church in Humboldt. Burial will be in Union Cemetery, Humboldt. Visitation with the family will be from 5-7 p.m. Sunday at the Mason-Lindhart Funeral Home in Humboldt. Lyle is survived by his son, Lynn Miller of Humboldt; daughter, Janet “Jae” (Bill) Landers of San Jose, CA; grandchildren, Jimmy (Reneé) Page of Los Angeles, Jessica (Eric) Zylker of San José, CA, Lizi (J.D.) Shearer of Clear Lake, FL, and Kelley (Nolan) Yalda of Los Angeles, CA; great grandchildren, Jackson and Chase Zylker; brothers, Earl Miller of Elkhart, IN, and H. Jon (Betty) Miller of Brookfield, WI; and sister, Zelma (Ken) Woody of Des Moines. He was preceded in death by his parents; first wife, Irene; second wife, Rita; third wife, Verna; sister, Bealda Henderson; an brother, Robert Miller. Lyle J. Miller, the son of Hiram and Pearl (Lage) Miller, was born September 7, 1921 at Chapin, Iowa. He was raised at Leland, Iowa and graduated from Forest City High School. Following his education, he began farming and was united in marriage to Irene Kloster on March 6, 1943. The couple moved to Austin, Minnesota where Lyle worked as a carpenter before moving to Humboldt in 1950. Their growing family made their home on a farm north of Humboldt and Lyle began working for his uncle, Jake Miller. He then began farming with neighbors, Frank and Bessie Soldow, eventually buying the farm. Irene passed away on September 26, 1972. He then married Rita McCormack and the couple continued to maintain their home in Humboldt until her death on July 25, 1984. On March 1, 1997, he was united in marriage to Verna Helle and they remained on the farm until moving to Springvale Senior Living. Verna passed away on May 5, 2013. Lyle was a member of the Faith United Methodist Church. He had served as a 4-H Leader, on the extension council, and as past president of Farm Bureau. He enjoyed camping with his family, reading westerns, and square dancing. He also enjoyed fishing and card club. He took especially great pride in achieving his pilot’s license and the age of 60 and loved to fly.

The family of Lyle J. Miller created this Life Tributes page to make it easy to share your memories.

Send flowers to the Miller family.