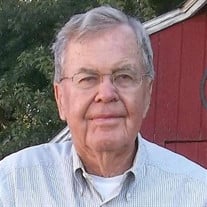 Lyle Spencer of rural Goldfield, Iowa passed away August 5, 2019 at the age of 88. A small memorial service will be held at a later date. Lyle D. Spencer was born July 27, 1931 at the family farm near Churdan, Iowa to parents Leland J. Spencer and Fern E. (Stotts) Spencer. He attended Highland Township #2 country school and graduated from Lohrville High School in 1949. In 1952 Lyle was drafted into the U.S. Army where he completed basic training at Ft. Leonard Wood, Missouri and was then stationed at West Point Military Academy, New York. Lyle returned home to Iowa, tried farming with his father, worked as a hired hand for farm families in the Lohrville area during the farming season, and found employment in area factories during the winters. Thanks to an inheritance from his mother’s estate, in 1967 Lyle was able to return to Iowa State University and enroll in the College of Agriculture, obtaining a degree in 1972. Lyle married Katheryn Pratt of Kingsley, Iowa in 1969. On their honeymoon, Lyle and Kathy homesteaded land on the shore of Lake of the Woods near Sioux Narrows, Ontario. Lyle appreciated the opportunity the Canadian government provided of obtaining land by building a cabin. For fifty summers, the couple returned to their beloved homestead site to make improvements and enjoy the Canadian wilderness. Lyle also appreciated the opportunity in 1979 to move to the small family farm near Goldfield, Iowa. He truly enjoyed planting and harvesting corn and soybeans, improving the farmstead by constructing buildings and planting an abundance of trees and bushes. Lyle’s interests included boating, waterskiing, scuba diving, and being a private pilot, but he was best known for driving the candy apple red ’66 GT Mustang he bought new and drove until the day he was hospitalized. Lyle’s deep concern for Iowa’s precious soils and water and his respect for rural Iowa history motivated him to write. Several of his articles were published in Wallaces Farmer and other farm magazines. From his articles grew the publication of two books: A Farmer’s Son and Struggles: The Early Adult Years. Lyle is survived by his wife Katheryn Spencer of Goldfield, his nieces, nephews, and a lifetime of friends. He was preceded in death by his parents, sister Donna (Spencer) Kreinke, brothers Harold Spencer and Dale Spencer.

Lyle Spencer of rural Goldfield, Iowa passed away August 5, 2019 at the age of 88. A small memorial service will be held at a later date. Lyle D. Spencer was born July 27, 1931 at the family farm near Churdan, Iowa to parents Leland J. Spencer... View Obituary & Service Information

The family of Lyle D Spencer created this Life Tributes page to make it easy to share your memories.

Send flowers to the Spencer family.