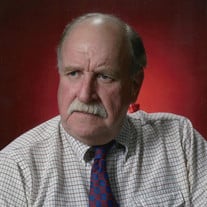 Marcus N. Ropte, 75, of Thor, passed away unexpectedly on Tuesday morning, April 26, 2022. Marcus Niel Ropte was born on October 28, 1946, in Fort Dodge, Iowa, the son and oldest child of Arthur and Helen (Brattmiller) Ropte. He was raised and attended country school in Beaver Township before the family moved to Thor. Marc graduated from Eagle Grove High School, “Class of 1965”. He then attended Eagle Grove Junior College and went to work for Boone Valley Coop before being drafted into the United States Army on January 28, 1969. Marc’s basic training took place in Louisiana before serving eleven months in Vietnam, where he was a Mess Sergeant, and then completed his time in the military service in Alabama and after his Honorable discharge on November 26, 1971, he returned to Thor. Marc went back to work in Eagle Grove until his retirement in 2009, his employers included Farmland Industries, AGP, and Alpharma. He has served the community of Thor as Mayor, since January of 2016. Marc is a member of Good Shepherd Lutheran Church in Fort Dodge. He enjoyed fishing, traveling the United States, gardening, watching John Wayne movies and as many know, he was an avid Iowa Hawkeye Football fan, being a season ticket holder for over 40 years. Survivors include his siblings: Susan Brock (Timothy) of Prairie Grove, AR, Tom Ropte of Mountain Grove, MO and Mary Lou Hiltabidle (Tom) of Eagle Grove; nieces and nephews: Erika Stolzer (Forest) of Prairie Grove, AR, Justin Br ock (Kyleen) of Hyattsville, MD and Matthew, Aaron and Melinda Hiltabidle of Eagle Grove and other family and friends. He was preceded in death by his parents. Funeral services will be held on Tuesday, May 3rd, at 1:30 p.m. at Good Shepherd Lutheran Church in Fort Dodge. Visitation will be Monday, May 2nd from 5:00 -7:00 p.m. at Mason-Lindhart Funeral & Cremation Service in Humboldt. Burial will be in Memorial Park Cemetery, Fort Dodge. www.masonlindhart.com

The family of Marcus N. Ropte created this Life Tributes page to make it easy to share your memories.

Marcus N. Ropte, 75, of Thor, passed away unexpectedly on Tuesday...

Send flowers to the Ropte family.