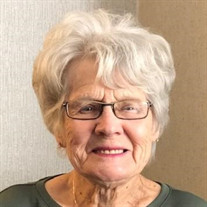 Mardelle Joyce Helmke, 90, of Humboldt, peacefully passed on April 30, 2022, at Rock Creek Assisted living in Ankeny, Iowa with her family by her side. Mardelle was born January 1,1932 in Craig, Nebraska to Howard and Ellen (Wedegren) Larson. She was an only child. After graduating from high school in 1950, she worked for Sam Classie Insurance. On May 26, 1957, she married Jerry Helmke from Renwick. The couple settled in Humboldt in 1959 where she was a stay-at-home mom with her five children until February 1970 when she started working at Pete Holt Insurance retiring in 1990. Mardelle was a member of Our Saviour’s Lutheran Church where she was active in women’s bible study, quilting, teaching Sunday School and was a substitute for playing the organ and piano. She was very active with the Republican Women and Humboldt Women’s Club. She also spent many years golfing in the women’s league at the Humboldt Country Club. She and Jerry spent several summers at Twin Lakes with their family until they moved to their home on the river where she hosted many gatherings for her growing family. Upon retirement they spent winters in Weslaco, Texas. Mardelle enjoyed crafting, playing dominos and spending time with her friends and her family who adored her. She was an amazing mother, grandmother and great-grandmother and had such unconditional love for them all. Mardelle was survived by her husband Jerry of 64 years, her children Angela, (Jeff) Paulson of Ogden, Shelly, (Randy) Hatch of Ankeny, Mitchell Helmke of Dumont, Carmala, (John) Pitt of Ankeny and Jennifer (Tim) Kapsch of Ankeny. Survivors also include 13 grandchildren and 27 great-grandchildren. She was preceded in death by her parents, an infant son Randy and two infant grandchildren, Hilda and Clara. Per Mardelle’s wishes her body has been cremated. A Celebration of Life will be held at 2:00 p.m. on Tuesday, May 10th at Our Saviour's Lutheran Church in Humboldt. The Mason-Lindhart Funeral & Cremation Service of Humboldt is in charge of the arrangements. www.masonlindhart.com

Mardelle Joyce Helmke, 90, of Humboldt, peacefully passed on April 30, 2022, at Rock Creek Assisted living in Ankeny, Iowa with her family by her side. Mardelle was born January 1,1932 in Craig, Nebraska to Howard and Ellen (Wedegren) Larson.... View Obituary & Service Information

The family of Mardelle J. Helmke created this Life Tributes page to make it easy to share your memories.

Send flowers to the Helmke family.