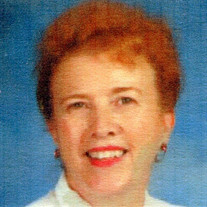 Marilyn Rose (Coleman) Ankenbauer, 82, of Belton, TX, passed away on Thursday, January 11, 2018 in Belton. Funeral services will be 10:30 a.m. Monday, January 22, 2018 at the Faith United Methodist Church in Livermore. Burial will be in Union Cemetery, Livermore. Visitation is from 9:30 – 10:30 a.m. Monday at the Church. The Mason-Lindhart Funeral Home is assisting the family. Marilyn was born on September 14, 1935 in Livermore, Iowa to the late Wilfred and Ruby (Koepke) Coleman. She received her education at Livermore and graduated from Livermore High School in 1953. She was united in marriage to William Ankenbauer on August 2, 1953 in Livermore and the couple made their homes in Algona, Fort Dodge, and Jefferson before moving to Belton, Texas in 1984. She was employed with the Belton Independent School District for many years before retirement. She was a longtime member of the First Christian Church in Belton and was very dedicated to visiting and sharing time with those in need. Marilyn truly had a heart of gold and was an exceptional cook, winning numerous awards at local fairs. She and Bill enjoyed traveling, especially their trips to Australia, Venezuela, Spain, Tangiers, Mexico, Germany and the Canary Islands. She especially loved spending time with family and friends and she will be deeply missed. She and Bill were married for over 57 years before he passed away in 2010 Marilyn was preceded in death by her parents; her husband, William; sons, William Ray and Scott Allen Ankenbauer; and three brothers, Kerry, Ronnie, and Larry Coleman. She is survived by brothers, Richard “Dick” (Dee) Coleman of Livermore, Iowa, David “Dave” (Bonnie Ricker) Coleman of Livermore, Iowa, and Craig Coleman; sister-in-law, Jolene Coleman of Livermore; along with numerous nieces and nephews.

The family of Marilyn R. Ankenbauer created this Life Tributes page to make it easy to share your memories.

Send flowers to the Ankenbauer family.