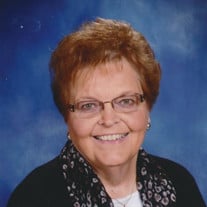 Marilyn Ann Barnes, 80, of Humboldt, passed away March 9, 2017 at Iowa Methodist Medical Center in Des Moines. A Mass of Christian Burial, celebrated by Father Brian Danner, will be 11 a.m. Tuesday, March 14, 2017, at St. Mary’s Catholic Church in Humboldt. Visitation is from 5-8 p.m. Monday at the Mason-Lindhart Funeral Home in Humboldt with a Women of the Spirit rosary at 5 p.m. Burial will be in St. Mary’s Cemetery, Humboldt. Marilyn Ann Ahlers was born to Eugene and Lucille Ahlers on March 24, 1936 in Dyersville, Iowa. Marilyn was the oldest of three children. She graduated from Xavier High School in Dyserville and from the Mercy School of Nursing in Dubuque, Iowa. Marilyn turned her passion of caring for others into a career. She was an instructor for the RN program at Hawkeye Tech and Iowa Central Community College. Marilyn furthered her nursing career by working at Allen Memorial Hospital and St. Francis Hospital in Waterloo, Iowa and retired her nursing career in 2001 after working at Humboldt County Memorial Hospital, in Humboldt, Iowa. Marilyn took great pride by providing professional care and was admired by many physicians, patients and nursing students for her dedication to the medical profession. Marilyn held several positions at St. Mary's Catholic Church including: Lay Minister, Rosary Leader, Chaplet of Divine Mercy, Secretary of the Ladies Society, the Women of Spirit and was a member of the choir. Also served at Chaplain of P.E.O. Marilyn always brought her competitive spirit in Bridge and other card games. She looked forward to gallivanting around with her Golden Girls and the Tuesday Tootsies. She will be missed for her contributions to the culinary world, which included: sugar cookies, peanut brittle, peanut butter cookies, potato salad, meatloaf and her infamous fudge. Marilyn was preceded in death by her parents, Eugene and Lucille Ohlers; infant brother, David. She is survived by her beloved daughters, Ann Watson (Steve), Julie Bengier (Don), and Kathi Fisher (Steve); grandchildren, Sara Liker (Nick), Ashley Watson, Megan Bengier, Matthew Bengier, Nicole Shelton (Brandon), Brittani Harrill (Grant), and Kaitlin Fisher; great-grandchildren: Jack Liker, Bennet Liker, Madeline Shelton, and Lahna Shelton; her brother, Loras J. Thomas Ahlers (Charlene) of Urbandale many nieces, nephews and friends. Memorials will be made to the Carmelite Monastery in Sioux City or St. Mary’s School in Humboldt.

The family of Marilyn Barnes created this Life Tributes page to make it easy to share your memories.

Send flowers to the Barnes family.