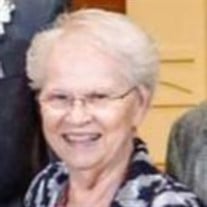 Marlene B. Vorland, 84, of Humboldt, passed away on Monday morning, December 27, 2021 at the Humboldt County Memorial Hospital in Humboldt. Marlene was born January 11, 1937, in Eagle Grove, the daughter of Marvin and Bernice (Butz) Johnson. She grew up in Eagle Grove and also Tama close to the Indian Reservation. She returned to Eagle Grove and graduated from Eagle Grove High School in 1955. On May 6, 1956, she was united in marriage to Kenneth A. Vorland Sr. at Lake Lutheran Church in rural Goldfield. They made their home on the family farm north of Hardy, where they raised three children, livestock and grain. Marlene was a farm wife and had also worked as a telephone operator and a secretary for chiropractors in Eagle Grove and Humboldt and later Jet Co. in Humboldt. She especially enjoyed singing and entertaining with her husband at countless nursing homes, hospitals and other gatherings. She liked to do drawings, paintings, write poems and stories and watching her grandchildren’s activities. In 2016 they moved off the farm due to health issues and resided in Humboldt. Marlene is survived by her three children, Kalene Greene (Dan Evenson), Kenny (Becky) Vorland, Jr. all from Humboldt and Kirk (Tammy) Vorland of Maysville, Kentucky; 7 grandchildren, Randy (Kristen), Corey (Angela) Greene, Brandon (Michelle), Clayton (Sierra), Bryce (Maggie), Chandler Vorland and Saundra (Drue) Wood; 13 great grandchildren; Damien, Hayden, Dawson, Karley, Cainan, Brevan, Jace, Lexi, Lincoln, Ryerson, Kahler, Mila, Emmett and Dominic; great-great-granddaughter Scarlett Harper; her sisters, Virginia Parrish and Charlene Baker and many nieces and nephews. She was preceded in death by husband Kenneth Sr., brothers Bernard, John and Marvin “Bus”, her sister Dolores and her granddaughter Stacy Jorgensen. Visitation will be from 1:00 p.m. until the time of the 2:00 p.m. Funeral Service, Friday, December 31st at Lake Lutheran Church in rural Goldfield with burial to follow at Lake Lutheran Church Cemetery. www.masonlindhart.com

Marlene B. Vorland, 84, of Humboldt, passed away on Monday morning, December 27, 2021 at the Humboldt County Memorial Hospital in Humboldt. Marlene was born January 11, 1937, in Eagle Grove, the daughter of Marvin and Bernice (Butz) Johnson.... View Obituary & Service Information

The family of Marlene B. Vorland created this Life Tributes page to make it easy to share your memories.

Marlene B. Vorland, 84, of Humboldt, passed away on Monday morning,...

Send flowers to the Vorland family.