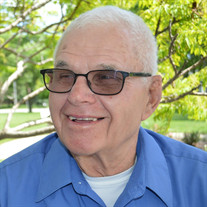 Marvin Lindemann, 83, of Humboldt, passed away October 31, 2017 at the Humboldt County Memorial Hospital. Funeral services will be 10:30 a.m. Saturday, November 4, 2017 at Our Saviour’s Lutheran Church in Humboldt with the Rev. Gene Broughton officiating. Interment will be in Indian Mound Cemetery, Humboldt, with full military rites by Adams American Legion Post 119 and Sathers-Odgaard VFW Post 5240. Visitation is from 4-7 p.m. Friday at the Mason-Lindhart Funeral Home in Humboldt. Gene Marvin Lindemann, the son of Carl and Leona (Bowen) Lindemann, was born February 28, 1934 on the farm where he would spend most of his life. He attended Corinth Township Country School and graduated from Humboldt High School with the class of 1952. He then joined the Army National Guard and attended a semester at Iowa State University in Ames. He enlisted into the United States Army and served in Japan during the Korean Era. Following his honorable discharge, Marvin returned to farm in Corinth Township and on July 27, 1958, was united in marriage to Marilyn Marcellus at the First Lutheran Church in Humboldt. Marvin loved his wife and family dearly and was dedicated to his dairy and crop farming operations, which included raising Registered Ayrshire dairy cattle. Marvin cared deeply about stewardship of the family land and was honored to be able to farm with his father for many years. Marvin enjoyed supporting his children’s 4-H activities, including showing their dairy cattle at the local and state fairs. He enjoyed square dancing with Marilyn and following his children’s school activities. In later years, Marvin was a devoted and loving grandfather. Marvin was a member of Our Saviour’s Lutheran Church where he served on the church council, the “Lift High The Cross” committee and also enjoyed participating in the church choir. He served on the REC Board for many years and was a current member and past president of the Humboldt Mutual Board. He served on the Soil Conservation Board and as a township trustee for Corinth Township. He was also a member of the Ayrshire Cattle Breeders Association and was an active Gideon. Marvin is survived by his wife, Marilyn Lindemann of Humboldt; his children, Denise Lindemann of Corwith, Mary Kay (Carl) Bruihler of St. Peter, MN, Michael (Michelle) Lindemann of Humboldt, and Sandra (Randy) Greufe of Blairsburg; grandchildren, Kelsi, Cody and Colton Lindemann, Bente, Jacob, Aaron and Sarah Bruihler, Kaleigh, Levi and Landon Greufe, Ashlee Arndt, Jayda and Weston Henson; 3 great grandchildren; brothers-in-law, Wendell Fortner of Humboldt and Kenneth (Nancy Decker) Marcellus of Brewster, NY. He was preceded in death by his parents; infant daughter, Michelle; grandchildren, Kirsten and Kaleb Greufe; and sister, Carol Fortner, and parents-in-law, Carl and Emma (Jacob) Marcellus.

Marvin Lindemann, 83, of Humboldt, passed away October 31, 2017 at the Humboldt County Memorial Hospital. Funeral services will be 10:30 a.m. Saturday, November 4, 2017 at Our Saviour&#8217;s Lutheran Church in Humboldt with the Rev. Gene... View Obituary & Service Information

The family of Marvin Lindemann created this Life Tributes page to make it easy to share your memories.

Send flowers to the Lindemann family.