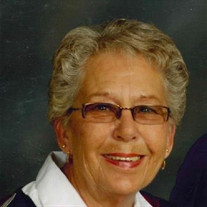 Mary Ann George, 82, of Humboldt, passed away Wednesday, September 4, 2019 at her home surrounded by family after a long battle with cancer. She was born to Lawrence and Gladys (Hoekel) Westberg in Humboldt on September 19, 1936. She graduated from Humboldt High School in 1956. On July 2, 1956 she was united in marriage to the love of her life, Donald W. George in Dillon, South Carolina and they started their married life in Fort Bragg, North Carolina. They later returned to Iowa and moved to Rutland where she enjoyed her life as a mother to their four children, Jeffrey, Curtis, Lisa and Shawn. In 1975 Mary Ann and her family moved to Humboldt. Once her children were raised she also managed a couple of family businesses. Mary Ann enjoyed golfing, quilting, sewing and cooking. Don and Mary Ann enjoyed 20 years of winters in south Texas during the later years of their 63 years of marriage. She is survived by her husband Donald, her children Jeffrey (Karri ) George of Humboldt, Curtis “Red” (Michelle) George of Ripon, California, Lisa (Tim) Bacon of Fort Dodge and Shawn (Andrea) George of Humboldt, her five grandchildren, Tawny, Ryan, Emily, Zachary and Halie, her brother’s Wayne Westberg of Woolstock, Iowa, and Robert (Linda) Westberg of Humboldt and her sister Marie (Jack) Haas of Humboldt. Mary Ann was preceded in death by her parents, brother’s Gary, Royal and Larry Westberg and her sister Janette George. Visitation will be Monday, September 9th from 9:30 – 11:00 a.m. followed by an 11:00 a.m. Celebration of her Life, both at Our Savior’s Lutheran Church in Humboldt. A private family burial will take immediately following at Union Cemetery, Humboldt. In lieu of flowers memorials can be made to Unity Point Hospice. In typical Mary Ann fashion casual dress is requested. www.masonlindhart.com

Mary Ann George, 82, of Humboldt, passed away Wednesday, September 4, 2019 at her home surrounded by family after a long battle with cancer. She was born to Lawrence and Gladys (Hoekel) Westberg in Humboldt on September 19, 1936. She graduated... View Obituary & Service Information

The family of Mary Ann George created this Life Tributes page to make it easy to share your memories.

Send flowers to the George family.