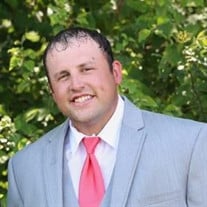 Matthew R. Beekman, 34, of Humboldt, died January 3, 2017. Funeral services will be 2:00 p.m. Saturday, January 7, 2017 at the Faith United Methodist Church in Humboldt. Burial will be in Indian Mound Cemetery, Humboldt. Visitation is from 5-8 p.m. Friday at the church. The Mason-Lindhart Funeral Home of Humboldt is assisting the family. Matthew Robert Beekman, the son of Greg and Cindy (Garton) Beekman, was born January 3, 1983 at the Humboldt County Memorial Hospital in Humboldt, Iowa. He was raised in Humboldt and attended Mease Elementary, Humboldt Middle School, and graduated from Humboldt High School in 2001 where he loved being a member of the basketball team, played football, and third base for the Wildcat Baseball team. Following his graduation, Matt enlisted into the National Guard and following 9/11, was deployed with Inland Security to the Great Lakes. He was proud of his service and honorable discharge that brought him back to Iowa where he attended Hawkeye Community College in Waterloo. While at Waterloo, Matt enjoyed his work at UPS. Matt was most proud of finishing his college degree. He made his home at Humboldt where he invested in duplex properties and became very interested in coin collecting. Matt loved the outdoors and became an avid hunter and fisherman and enjoyed many fishing trips with his family. He also enjoyed his participation in bowling league at Sundance Lanes. Matthew is survived by his mom and dad, Cindy and Greg Beekman of Humboldt; his brother, Chris (fiancé, Cristina Heinzerling) Beekman of Tampa, FL; and his sister, Brittany (Hernan) Ramos of Webster City. He is also survived by his grandmothers, Carolyn Garton of Humboldt and Gloria Beekman of Pocahontas; and his special great-aunt, Ann Tjelmeland of Pocahontas. Matt joins in heaven, his grandfathers, Arlen Garton and Robert Beekman.

The family of Matthew Robert Beekman created this Life Tributes page to make it easy to share your memories.

Send flowers to the Beekman family.