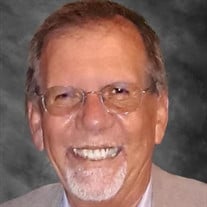 Michael D. “Mike” Steding, 67, of Longwood, Florida, passed away peacefully on Tuesday morning January 11, 2022 at the Opis Island Lake Center in Longwood, Florida. He was born November 7, 1954 in Hampton, Iowa, the son of William Donald and Betty Mae (Johnson) Steding. He was raised in rural Coulter and graduated from CAL Community School in 1972. He attended Waldorf College in Forest City and later the University of Iowa, where he obtained his bachelor's degree in elementary and special education. Following his education, Mike made his home in Mason City, Iowa. He briefly was employed at Opportunity Village in Clear Lake Iowa, now Life Works Community Services. In 1978, Mike began his career as a real estate appraiser at Mutual Federal in Mason City. With his young family, Mike relocated to Orlando, Florida in 1981. He continued his career as an appraiser in the real estate industry for the past 40 years, many of those as an associate with Clayton, Roper and Marshall. In 1996, he became a loyal friend of "Bill W" and all of its many members. A few of Mike's enjoyments in life included fishing, following his alma mater Iowa Hawkeye's sports teams, and attending the Saturday morning Northland Church Authentic Manhood Men's Group. Mike's adult children, Audra, Dawnelle, and Josh were his primary focus and the loves of his life. He will lovingly be remembered as a gregarious guy who loved to laugh, joke, and encourage others. He never met a stranger. Above all, Mike loved his Lord and Savior and was a baptized member of the Body of Christ. Mike is survived by his daughters Audra Steding (Richard Heiner, fiancé) of Orlando, Dawnelle Steding of Atlanta, Georgia, his son Josh Steding of Tallahassee, his daughter's mother, Lisa Steding of Orlando and his sister Janice (LeRoy) Jorgensen of Humboldt, Iowa. He was preceded in death by his parents, his brother Victor, and an infant brother William. A Celebration of Life service will be held on February 12, 2022 at 11:00 am at Northland Church Sanctuary 522 Dog Track Rd, Longwood, FL 32750. A reception will follow at the church. The service will be livestreamed for those who are unable to attend. https://vimeo.com/event/701774/c641f13f08 In memory of Mike charitable donations may be offered to: Rebos Club 130 Normandy Rd. Casselberry, Fl. 32707 and/or Life Works Community Services https://www.paypal.com/donate/?hosted_button_id=FB837CAAHW4Z4

The family of Michael D. "Mike" Steding created this Life Tributes page to make it easy to share your memories.

Send flowers to the Steding family.