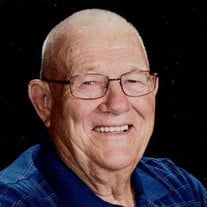 Norman H. Peterson, 88, of rural Humboldt passed away at the West Bend Health and Rehab Center on December 21, 2018. A Service of Remembrance will be held at 11:00 a.m., Saturday, January 5, 2019 with visitation after 10:00 a.m. at the Mason-Lindhart Funeral Home in Humboldt. Norman chose to be cremated. A scattering of ashes will be held at a later date. Memorials may be made to the family to be used at their discretion in lieu of flowers. www.masonlindhart.com Norman was born in Rolfe on March 20, 1930 to Robert and Cora (DeMoss) Peterson. He attended the Rolfe schools and lived in Iowa most of his life. As a youngster he would deliver coal with a team of horses to families for heating their homes and businesses. He also would break wild horses for his Dad. He met Gertrude (Trudy) Goldener when they both worked at Tobins which was later bought out by Hormel. They married on June 2, 1951. Norman served in the 213th artillery reaching the rank of Sergeant. He built bunkers for forward positions and transported ammunition to the front. He won many medals including the Bronze Star for construction of observation posts. He served actively from 1952 until 1954, and then in the reserve until 1960. Norman built a home for his family on their farm North of Fort Dodge. They later moved to the Humboldt area to be able to have more farm land. Norman continued to work for Hormel. His duties included working on the kill floor, in shipping, and as a groundskeeper until his retirement in 1983. He helped a good friend, Harold Vosberg, on his farm. Norman was involved in farming even after he turned over the crop production to his son, Troy. You could often see him out picking up rocks and checking on the crops. Norman had a couple of milk cows most of his life. He also raised beef cattle, chickens, horses, sheep, pigs, turkeys, and some goats. Family, friends, and farming were priorities for Norman. He and Trudy took the family on many adventures in Europe and in the U.S. He believed in working hard and enjoyed spending time with family. Education was also very important to Norman and Trudy. Norman is survived by one brother, 5 children, Roy (Kim) Peterson, St. Louis, MO, Sonya (Tom) Colvin, Ames IA, Heidy (Daryl) Vosberg, Lake Elmo, MN, Lory (Roy) Bowerman, Jacksonville, FL and Troy (Mary) Peterson, Humboldt, IA, 12 grandchildren, 14 great grandchildren, Eileen Ford his special friend, and many other friends and relatives. He was proceeded in death by his wife, Trudy, of 54 years, 2 brothers, 2 sisters and Bessie and Melvin Heiter.

The family of Norman H. Peterson created this Life Tributes page to make it easy to share your memories.

Norman H. Peterson, 88, of rural Humboldt passed away at the...

Send flowers to the Peterson family.