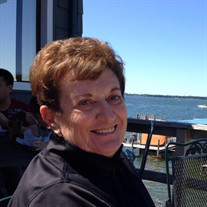 Rachel Ruth Fuller was born to Noah and Elizabeth (Schmidt) Anliker on March 23, 1939 in Hardy, Iowa then moved to a farm near West Bend. Following a year of treatment for rheumatic fever at the University of Iowa Children’s Hospital and a tragic fire, the family moved to Bradgate, Iowa where she received her education graduating in 1957. Rachel worked at Universal Manufacturing in Algona until she was united in marriage to the love of her life, Dennis Fuller on September 28, 1958. They had two children, Teresa and Tom. Rachel worked at the Humboldt City Clerk’s office for nearly 30 years. She loved camping, boating, fishing, golfing, singing in the church choir and Community Chorus, traveling and watching Humboldt High School, UI and ISU sports. When Dennis retired in 2000, they began spending 6 months a year in Arizona City, Arizona where they made friends from all over the US and Canada. Two grandchildren, Corinne and Maddy were added to the family and Rachel loved having them and many family and friends come to Arizona to golf and swim. Rachel and Dennis continued their favorite activities, including taking their motorhome to nearly every state, including Alaska, and most of the popular national parks. Rachel peacefully passed away April 30 with Dennis at her side at the Paula J. Baber Hospice House in Fort Dodge where all of her immediate family had been able to spend her last days with her. She is survived by her loving husband of 62 years, Dennis, daughter Teresa Kulper of Iowa City, son Thomas (Melanie) Fuller of Sioux Falls, South Dakota, granddaughters Mary Corinne Kulper of Cedar Falls, Iowa and Madison Claire Kulper of Des Moines, Iowa. Surviving siblings are brother Dan (Delores) Anliker of Mediapolis, Iowa, sister Esty (Mike) Steil of West Bend, Iowa, sisters-in-law Susan Fuller of Rockford, Illinois, Linda Fuller of Ft. Meyers, Florida and Diane (Doug) Lanning of Gilmore City, Iowa. She was preceded in death by her parents, brothers, sisters and their spouses Ray and Pearl, Richard, Earl and Gladys, Paul, Alice, Helen, Hazel and Joe Moser, Irene and Lyle Rick, Leona and Don Lanus, plus her brothers and sister-in-law Charles, Richard and Norma, and Ron Fuller. Visitation will be from 5:00 – 7:00 p.m. on Friday May 7th at the Mason-Lindhart Funeral & Cremation Service in Humboldt and the Funeral Service will be held at 11:00 a.m. on Saturday, May 8th at Faith United Methodist Church in Humboldt. Burial will be in Union Cemetery, Humboldt. www.masonlindhart.com

Rachel Ruth Fuller was born to Noah and Elizabeth (Schmidt) Anliker on March 23, 1939 in Hardy, Iowa then moved to a farm near West Bend. Following a year of treatment for rheumatic fever at the University of Iowa Children&#8217;s Hospital and... View Obituary & Service Information

The family of Rachel R. Fuller created this Life Tributes page to make it easy to share your memories.

Send flowers to the Fuller family.