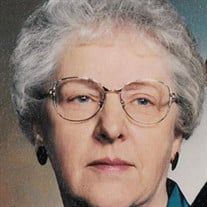 Ramona Rae Joiner, the daughter of Raymond and Elsie (Caryl) Hansen, was born November 12, 1928, in Humboldt, Iowa. She was raised and educated in Humboldt and graduated from Humboldt High School with the “Class of 1946”. On March 29, 1947, Moni was united in marriage to Charles Allen Joiner at the United Methodist Church in Humboldt. Together they made their home in Humboldt raising three children. Moni worked as a telephone operator for Northwestern Bell Telephone Company, for Wilbur and Elaine Curran at Country Floral as a floral designer and Dr. Ken Pride at Pride Chiropractic as an office manager. Moni was a member of the VFW Auxiliary, the United Methodist Church, United Methodist Women, Charisma Church Circle and helped lead the MYF Youth Group. She especially loved being a “grandma” to her grandchildren and great grandchildren. Moni enjoyed crocheting, gardening, flowers, antiquing, playing 500 in three different card clubs and belonged to several coffee clubs. Moni passed away Monday, March 7, 2022, at Humboldt County Memorial Hospital at the age 93 years. She was preceded in death by her parents; husband, Charles in 2012; son, Allen Joiner and siblings, Denison Hansen, Joyce Simonsen and Dewey Hansen. Survivors include her children: Deedee (Randy) Johnson of Milford and John (Stacy) Joiner of Ames; daughter-in-law, Josie Forret of Adel; grandchildren: Jennifer (Matt) Richardson of Littleton, CO and their children, Charlie and Addison, Katie Joiner of Philadelphia, PA and Jane Joiner of Ames, her sister, Marcia Terwilliger and her sister-in-law, Joyce Hansen both of Humboldt. Funeral services will be 10:30 a.m. on Monday, March 14, 2022, at the United Methodist Church in Humboldt. Visitation will be Sunday from 3:00 – 5:00 p.m. at Mason Lindhart Funeral and Cremation Service in Humboldt. Burial will be in Union Cemetery in Humboldt. Memorials in Ramona’s name can be made to the Humboldt County Memorial Hospice Unit. www.masonlindhart.com

Ramona Rae Joiner, the daughter of Raymond and Elsie (Caryl) Hansen, was born November 12, 1928, in Humboldt, Iowa. She was raised and educated in Humboldt and graduated from Humboldt High School with the &#8220;Class of 1946&#8221;. On March... View Obituary & Service Information

The family of Ramona R. "Moni" Joiner created this Life Tributes page to make it easy to share your memories.

Ramona Rae Joiner, the daughter of Raymond and Elsie (Caryl)...

Send flowers to the Joiner family.